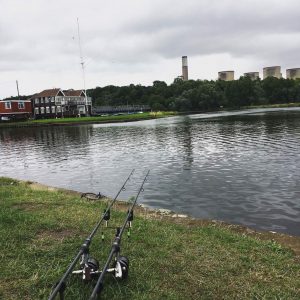 A follower of my Instagram account and I got talking and it became apparent that we lived only a few miles apart.
After a bit of success on my last couple of river outing he had got in contact and pointed me in the direction of a spot he knew a few miles upstream that had the potential to hold a few nice river carp.
I did a small run up there the day before to just go and check it out and see if I could find any spots with a lead that maybe I could leave a little bait to keep or attract a few fish into the area for the night the next day.
I arrived to the river on Sunday and saw a few fish show themselves not to far from a couple of spots I had found between the weed and Lilly's. I decided that the hard gravel spot I had found would ultimately be the best bet for a fish over the coming night.
I cast the rods out to the spots and felt the hard donk through the rod that signalled the hard gravel bottom I had found the day earlier. 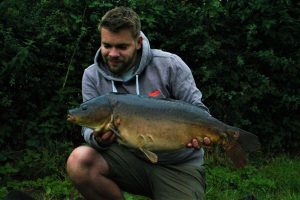 A hand full of the RF1 boilie down the side of a narrow boat and the same again a few rod lengths outs past a weed bed was the combination that I had the utmost confidence in.
A few hours had passed with a couple of bream hitting the bank but I was confident that the carp would move in by morning.
A very wet night found me bound to the bivvie with the door done up tight. A few hours sleep and I awoke the sound of my alarm creaming as a fish was trying hard to swim over to the snags on the far margin, a quick fight through the weed and Lilly beds showed off a lovely old river warrior.
Check out my Instagram for past catches and to keep up to date with what lies ahead