Andy Matthews, just demobbed from British Transport Police, had a great retirement present in the shape of a new record mirror of 61-04 from Wingham Carp Lake. 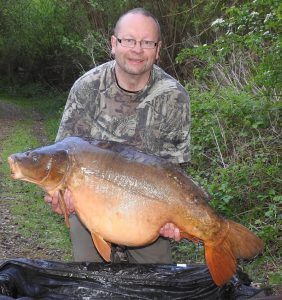 Andy takes up the story:
“Black Spot is the fish I’ve wanted to catch ever since Steve invited me to join the Wingham Carp Lake syndicate all those years ago. I must admit that after the outrageous good fortune I’ve had over the years, bringing me the Long Common at 55-08 plus the sadly missed but never to be forgotten Big Plated at 52lb in the same session, and then Bob’s Common at 52-08, I really thought I was asking too much to capture Black Spot.
“When I arrived on Tuesday for a 48 hour trip I was just happy to be back at the lake fishing and relaxing, listening to all the birds singing and seeing more Cuckoos than I have in years. I was getting ready to take a few sunset photos and had just made myself a cup of tea when at 19:15 I had 2 bleeps on my right hand rod. I looked up thinking it was probably a bird that had knocked my line, only to see the line cutting through the water as my rod tip started to bend round, followed by the clutch starting to scream as line was taken. I was on the rod in a flash and felt the satisfying pull of a fish as it began to kite to my left over the plateau at speed, which deceived me into thinking it was a smaller one.
I turned her by the far side of the plateau, and was then treated to one of the best fights I’ve ever had. She kept going backwards and forwards in front of me. I slowly gained line, although I kept having to give back what I’d gained. After what seemed an age she was going round in front of me but stayed deep. I’d long since realised this was a big fish, however due to the setting sun I couldn’t see her. After what seemed an age she came up in front of me and I saw the black spot on her side meaning I had the Lady of the Lake and I started shaking. I sank the net, she glided in and she was mine! I wanted to shout and  jump and down I was so elated!
The battle had lasted almost 45 minutes and my arms were aching. When I lifted her onto the scales I couldn’t believe it when they went round and settled on 61lb 4oz. I checked the weight 3 times and then took the photos, which was not easy as I was still  shaking so much – I think I was in shock. Then it was time to return her to her home, and as I allowed the unhooking mat and sling to fill with water I felt her slowly move over my hand as she glided off into the depths, leaving me with the memory of a lifetime to add to the other 50lb+ carp that Wingham has given me.”
Wingham fishery manager Steve Burke commented, “Everything is very late this year at Wingham and the carp have not long woken up.  Indeed, pike were spawning 3 days after Andy’s catch!  With no hot weather forecast for us there’s plenty of time for Black Spot to put on a several more pounds before spawning.” 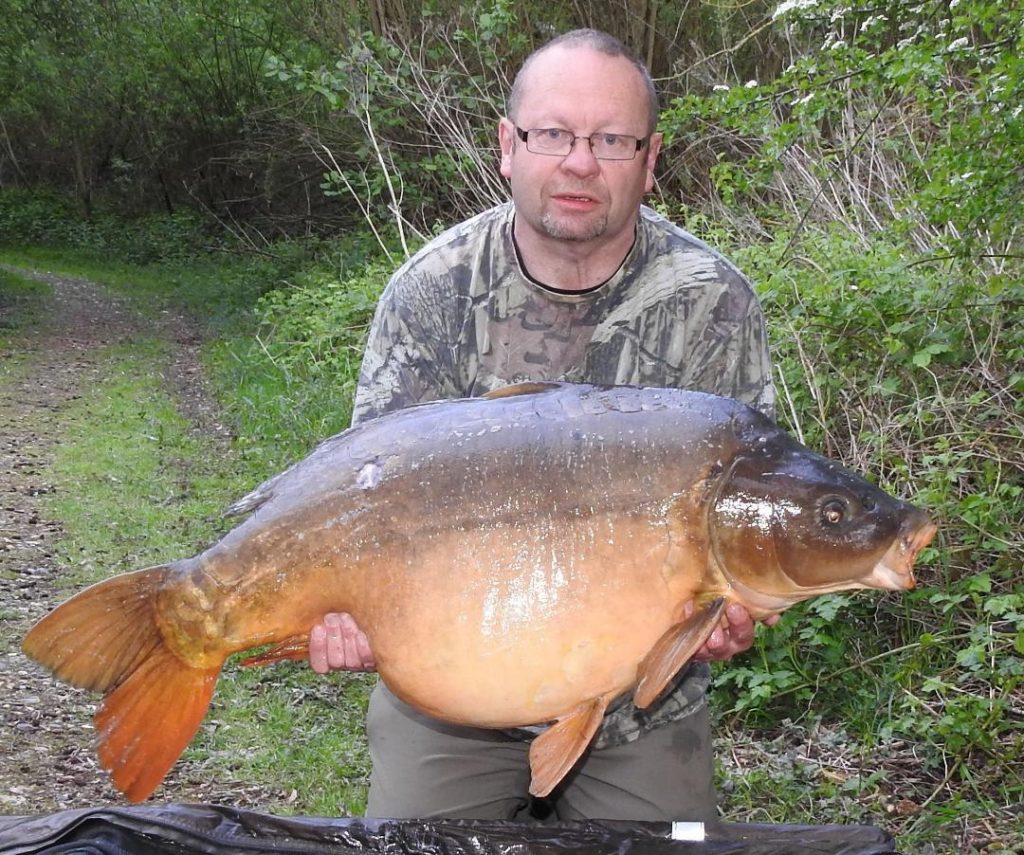