Steve Burke Has Retired From Wingham 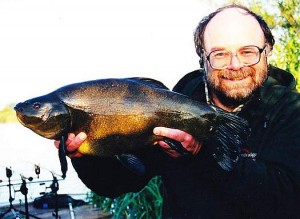 Without Steve Burke, there would be no Anglers’ Net. Steve was the inspiration to launch this website in 1999, the source of many articles, the go-to man for contacts and, basically, my inspiration. Wingham was, and still is, our Mecca; the place where we often come together and turn virtual friendships into real-life ones. It’s a very special place and a credit to all the work that Steve has put in to it, with support from his beloved wife, Peggy.

I’m sure that I speak for all at Anglers’ Net when I say that we wish Steve and Peggy all the best in their next chapter. Thank you for being such a big part of our lives. You are family.

Here’s what Steve told us today….

It’s with mixed feelings that I’m announcing my retirement from Wingham Fisheries.

Until now I hadn’t felt confident that my legacy would continue and that Wingham would be in safe hands, but now I am.

From June 16th Wingham became the responsibility of the owner’s daughter and new son-in-law, India and Matt Radbourne. I’ll be holding the fort until their return from honeymoon at the beginning of July.

Let me assure everyone that there are no plans to make any major changes at Wingham – after all, why change a winning formula!

The plan is that I continue on a consultancy basis, and in particular vetting prospective new members – something that a great many of the members have already expressed grave concerns about.

Matt and India are very excited about Wingham and are totally committed to the project. It’s an ideal opportunity for the newly weds, who will be living nearby, to continue my life’s work.

When I started Wingham over 25 years ago I never dreamt it would be so spectacularly successful as it has been. My novel and unique approach to fishery management, in particular the lack of fishing pressure, was unproven and there were a lot of doubting Thomases. History though has proved me right, and Wingham already has a reputation second to none. This is partly due to the strict vetting of prospective members, and also to the low stock density of pedigree fish. However the defining difference is the lack of fishing pressure, and this is the reason why Wingham has produced so many big fish at such a young age.

However, as all the members know, the best is yet to come. The Main Lake, with the fish being some 3 years younger than the Carp Lake, has had even less pressure, and is on track to break the current carp record. “Malcolm”, the biggest caught so far from the Main Lake at 57-10, is a male, and when caught just after the “Beast from the East” in early Spring 2018 would have been at his lowest weight of the year. On the other hand, females like Black Spot in the Carp Lake are biggest just before spawning, typically late May/early June. So if caught this December Malcolm will almost certainly be a fair bit bigger than the 61-04 Black Spot has reached – even if he hasn’t grown any further!

Many members have seen other very big uncaught fish in the Main Lake, and one in particular is even bigger than Malcolm.

The problem with minimising the pressure and not fully opening the Main Lake to carp fishing until recently has been a double-edged sword as there’s been little time to catch the biggest fish such as this one. I’m disappointed it didn’t come out before I retired, but I’m confident it’s only a matter of time before it does so, and also that Wingham breaks the carp record.

I am pleased though that we’ve successfully fenced both lakes before otters arrived. It was a huge expense but, with an otter recently being caught on camera only a mile downstream, it would have been just a matter of time before Wingham would have been ruined. I really feel for members of other local waters that have yet to protect their stocks. Even if started now it could well be too late.

Finally, I’d like to thank all who’ve helped my dream come true. There are far to many to list individually but you know who you are! However I need to single out my wife, Peggy. Without her wonderful support Wingham wouldn’t have been the great success it has been. She went without for many years, but only recently has she put any pressure on me.

In fact in years gone by the only pressure from Peggy was for me to go fishing more! As the members know, I now don’t get much time to write, let alone fish the waters I created. I now intend to correct both these things and at last enjoy the fruits of my labour.