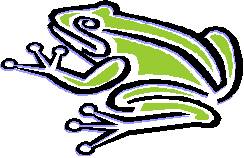 Hello again. While some of you may be familiar with my semi-fictitious Lure Angling Oddessey series (it’s still going strong!), I’ve had a few requests to look at some of the tactics and techniques in more detail. The first two instalments of this new series are going to look at approaches to fish location: Leap Frogging and Stalking. While most of you have an idea what I mean by stalking, leap frogging is my own term for an effective method of being time efficient in getting to know an unfamiliar fishery. So let’s go…ribbit.

One of the great things about lure angling is the lightweight tackle you carry. No big seat boxes or carping paraphernalia, just the basics. This lack of clutter gives us that chance to roam and explore a water. While this type of approach is often referred to as stalking, I make a distinction. Stalking is when you actively target fish and only make casts when you are fairly certain that there’s a fish there. As a consequence you do more stalking than actual fishing.

Leap frogging involves covering as much of the fishery as possible. This is done by fishing every second available peg on the walk out, and then returning via those you ‘leap frogged’ on the way back. Easy!

While it may seem as simple as that, the purpose of this exercise is not solely to catch fish. What?! You may ask. No I’m not mad. Anything you do should be considered as a long-term investment and by carefully leap frogging the first time you visit a water you will gain an enormous amount of information for the second and further visits. Putting in the legwork now will help you catch more fish in the future.

So where do we begin? The first thing is to avoid traps of running straight to likely looking peg and staying there for ages. You’re defeating the object. You must discipline yourself. Limit the number of throws in each peg to an arbitrary number. Anything between 6-12 is best. Usually with lure fishing if you’ve not had a take in the first 12 casts you might as well move on. By setting yourself a limit also forces you to concentrate and make each retrieve count rather than being lazy and just winding the lure back. Work it! Make it come alive (or better still, barely alive!).

The second decision to make is of course lure choice. If you have no reliable intelligence about the water then this can be a very personal decision. I would generally go for a gold or silver coloured spoon of about 18-25 grams. Why? The spoon has many advantages when leap frogging a new water. First it’s a good all round lure, which can be fished deep and slow or shallow with the rod tip high. Second, spoons are fabulous for bouncing off the bottom using the ‘countdown method’ thus enabling you to get a picture of the underwater features and depth changes. "Right, you at the back who said something about Carol Vorderman’s bottom!" No, the ‘countdown method’ has nothing to with tedious word games. By ‘counting’ down your lure (one esox lucius, two esox lucius, three esox lucius, etc) you can get a good estimate of the depths you’re faced with. I suppose it does have a little to do with numbers and bottoms, but not the ones you were thinking of!

The third reason I choose a spoon is because I have caught most predators from small perch to double figure pike on the classic toby or similar spoons. My friend Mark has even caught barbel on them! (that’s another article – watch this space!) This doesn’t preclude you from catching whatever may be there, a 100gram jerkbait would probably stop you catching the 2 pound chub…but then again, knowing chub! Last, but not least, they’re dirt cheap. I get them from my local tackle shop for under £2.00, so if there are lots of snags its not going to be a costly day. You wouldn’t do that with that hand crafted wooden plug now would you?

So you’ve got your lure. Now make sure you use a wire trace. Always assume that there are pike in the water. There probably are you know. The amount of pike I’ve caught in places where I’ve been assured I’ve been wasting my time beggars belief.

Now you’re at the water’s edge. Simply because we’re leap frogging, doesn’t mean we’re not going to read the water. So use your limited number of casts properly. An excellent method is to fan your casts. But I prefer to do this by switching sides until my casts meet up in the middle (casts 1-9 on the diagram). One close to the bank on the right, one close to the bank on the left, then alternately. I do this because so often fish are holding close in tight to features such as rocks, tree roots, boats or pilings. Approach the bank with care so as not to disturb any of these water’s edge dwellers. Repeat this up and down the bank until you’ve got a feel for the water.

By the end of your leap frogging you should know a lot more about the water than the person who’s been fishing the same two or three pegs for twenty years, and you’ve maximised your chances of catching, in fact you probably have done. If you’re a general angler or match angler, this vital intelligence will serve you well especially if get drawn in ‘unfavoured’ sections in a match.