My Way With Pike 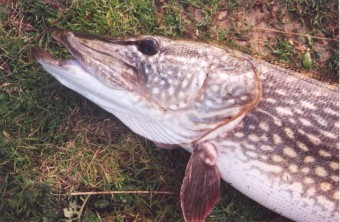 Home » My Way With Pike

I first started fishing for pike over 40 years ago on the Wallers Haven with a huge green and red pike bung that was similar to a Fishing Gazette float, except it didn’t have a slit in the body. My bait was a rudd on a snap tackle caught from a dew pond in Hooe. In fact, it came from the first water I ever fished and I can remember it was carried down to the marsh with other baits in a tin can hooked over the handle bars of a friend’s push bike.

How times have changed; the pond has since dried up, I no longer fish with snap tackle and I do not use livebaits for pike fishing any more. My float, when I use one, is now a more streamlined affair and shaped like a cigar, though for the most part I do not use a float at all.

Everybody who fishes long enough develops their own style, and while the very good anglers will adapt to the conditions and waters they are fishing at the time, many will be just variations of the same method they are comfortable with, which is generally the method they have been most successful with.

One of the most successful pike anglers that I know, Pat Sweeney, developed a method of catching large pike from marshland drains that is also unique and he and his friend, Mick Kobylka, landed numerous 20lb plus pike to 35lb using it. Hopefully, one day Pat will write to tell us how he did it. For a while I copied Pat’s method and landed a number of good fish using it, but never the same amount, or as big he caught.

It was a paternoster that he developed to suit his own style and the waters he was fishing. But, when I come to think about it, I have caught pike from many types of waters and fished for them with many different methods and baits. Nearly all the methods worked, to a lesser or greater degree, but most of us are only gifted in certain directions and to achieve the best results possible, we should perhaps concentrate on those things which we are good at.

For a while I fished with lures, spinners, spoons and plugs and caught many pike on them, but never a big one. Fifteen pounds was the best I managed with a colorado spoon, one of my favourites; I wonder what happened to them? I tried livebaiting on straight through float tackle, lip hooked livebaits on a paternoster, (believing that it was a more humane way of livebaiting), ledgering, drift float fishing, deadbaiting with all types of fish baits and I have even deliberately caught pike on worms. Worrying about what bait I should use, rather than concentrating on where pike were likely to be. Lets face it, pike will eat anything that moves providing it is small enough and many things that don’t move. I believe, for example, that pike are scavengers, especially when they are big and old. If they can pick up a dead fish off the bottom without exerting too much energy then they will do so, in preference to chasing a live fish which they may, or may not, catch.

This, of course, remains true providing all things are equal, but things are rarely equal and where livebaits score over deadbaits is where the angler is not sure where the pike are. A moving bait could attract a pike which is some distance away, but a deadbait laying on the bottom remains unnoticed. Livebaits tend to score over static deadbaits on trout reservoirs which have recently been opened for pike fishing. The likely reason for this is that the pike are not used to picking up deadbaits from the bottom. For the most part, they probably feed off the odd sick rainbow, which has recently been stocked. An easy meal; not necessarily a dead one, more a lethargic one!

This is why I think livebaits, or moving deadbaits, out-fish static deadbaits on this type of water when they are first opened for pike fishing. After a while, static deadbaits can be used with success once the pike get use to picking up food from the bottom.

Static deadbait fishing can be a very good way of catching big pike and my son, Andrew, who has caught more twenty pound pike and bigger ones then I, rarely fishes with anything else. So having established that deadbaits are a good pike bait, what type of deadbaits should we use? Again, I have tried all sorts of deadbaits from large roach to tiny gudgeon and from sprats to huge herrings and mackerel.

I used to think that the bigger the bait the bigger the pike, but I now know this is not so. Pike will eat whatever is available to them and although they are known to tackle baits so large that they have choked to death, it is a mistake to fish with really large baits. Very large baits, I know are selective, but small pike struggling with a big bait results in missed runs and, therefore, the temptation is there to leave it too long before striking.

At one time I would fish with baits of 1.5lb and even bigger; such as small pike, but I must say my results with these were poor and I now fish with bait much smaller.

Freshly killed coarse fish such as rudd, roach, bream, chub, dace, carp or perch all catch plenty of pike on their day, but from my experience I would say seafish deadbaits are better. My reasoning for this is that, apart from observation, they are very oily and this is an advantage in attracting pike to the swim. If a pike spots a bait laying on the bottom, then it doesn’t matter what it is; if it’s hungry, it will have it, but unless there is something to attract it to a certain swim where the bait is, it could swim by without knowing there is food in the vicinity. Oils in seafish give you that little extra edge that you sometimes need in fishing.

I have caught pike on many different seafish, but my preference is to fish with either sprats, herring, sardine, or mackerel and generally it’s mackerel that I use if I can.

There are three reasons for fishing with mackerel, which are: it is a very oily fish, has a tough skin for casting and is usually easy to obtain. I usually only fish with a half of a fairly large fish and unless I run out of them, fish with the tail half. The reason for this is that I only use one set of trebles, which I hook into the bait at the would be head end and tie the wire trace to the wrist of the tail. Because of the shape of the tail, it holds on very well during casting and I can cast around 50 yards with just the bait using this method. Fifty yards usually being plenty far enough and, as often as not, only half that distance is called for.

So there you have it. Most of my pike fishin
g is like me – simple; half a seafish bait, one semi barbless treble, wire trace at least 15 inches long and 15lb breaking strain line with a 2lb test curve rod.

I like to use just one treble so that unhooking is made half as difficult as with two and by having only one small barb on one of the three points, makes it even easier to unhook the pike. Unlike carp, pike, despite their appearance, suffer badly from being caught and anglers who do not know how to handle them correctly sometimes leave hooks in them and if a hook seals the throat, then the likelihood is that they will die. But, by using just one treble and a semi barbless one at that, it goes a long way towards protecting the pike.

Free lining may seem an irresponsible way of fishing since, if a pike doesn’t run straight away from you, you could have a run and not know about it, the result of which would be a very deep hooked fish. I agree, if you are not set up correctly this could happen.

Once again, my method is simple, but effective. Firstly, the size of bait is very important and should be at least half a pound, since you will have to tighten up on it so that the line is taut from the rod tip to the bait without any slack. This is how I do it; after casting and allowing for the bait to sink to the bottom, I tighten up and place the rod on two rests with a bite alarm on the front rest. The bite alarm is not essential, but it does give you that extra bit of freedom while waiting for a run. Once on the rest, the line is placed in a clip on the butt and the indicator fitted between the first and second eyes. My indicators are made from the plastic covering of electrical wire, which are bent into a circle and joined by another short piece of plastic which is pushed inside both ends of the circle. This is done by heating the circle with boiling water, or near boiling. The plastic then becomes pliable and easy to manipulate. The indicator easily pulls apart, making it easy for clipping and unclipping on the line.

The first indication of a bite is usually when the line is pulled from the clip and the indicator drops to the ground. Either that, or the indicator just drops as a fish runs towards you. I use this method of pike fishing on a number of different waters and find it very effective. It works well on some of the coastal gravel pits that I fish and is equally as effective on estate lakes. On marshland drains and dykes, it also works, although, because I am usually fishing at close range on these waters, I often float fish instead. I don’t think there is any real advantage, it’s just that it is more aesthetically pleasing.

My free lined method works well with mackerel and herring, but I find casting with sardine a problem as they fall apart quickly; they are exceptionally oily which is an advantage, but will not put up with more than a couple of casts. Sometimes, when I first arrive at the water the sardines are still frozen and they can be cast with ease, though I need to check that they sink; often while frozen, they float. Once in the water, they quickly thaw out and all you need to do is to wait for a pike to find it. However, if you need to keep recasting they will not last long.

Sardines are very good when fishing small rivers or marshland drains, where an underarm cast is usually all that is required. Sprats cannot really be free lined unless you are fishing sink and draw, but when fishing at range it is not possible to tighten up. In these situations, if I went to fish a sprat, I use a fairly heavy ledger weight threaded on the line above the trace with a bead to protect the knot and swivel. I used this method at Powdermill Lake near Battle in the eighties to catch a number of upper double figured fish. I do not always fish this method for pike, for I continue to experiment, but when I look back, most of my pike have been caught using it.