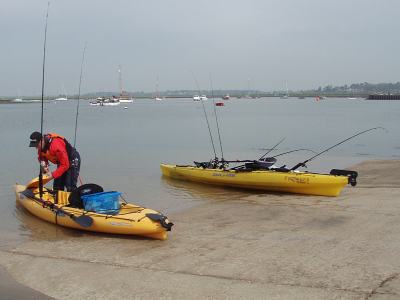 A new one on me – I’d never fished the River Alde at Aldeburgh, Suffolk before and I’d never fished specifically for Bass before. I’d also not had a Bass from the yak and not fished with Billy before so quite a lot of firsts for me on this session.

Billythebass had come over a few days before to pick up the reels I was selling and we hatched a cunning plan to have a crack at the bass that had just started to appear after the winter. A few schoolies had been reported and so we decided to have a bit of sport.

I was due to meet Billy at 9am, 33 miles and an hour away and accordingly set my alarm for 7:30, naturally waking up rather excitedly at 6:30. My wife wasn’t excited however so I had a coffee and got my gear together and loaded up the yak.

The previous afternoon my daughters and I had taken some drop nets down to the pier and in an hour had managed to get 22 4-inch prawns to hopefully use as livebait. This was cracking fun and the first time I’d been this year as it’s been a bit rough and is still a bit early for them to be here in numbers. Kept overnight in the fridge half a dozen were still alive when I left which was not a good percentage having had some last for days previously. Still, bait is bait and off I went.

Arriving by the Martello Tower I dumped the Trident and kit off and went and parked. Billy was already there and getting set up and I got my first look at a Hobie. He has the revolution and I had a good old nose about. I was very impressed – apart from the excellent quality there really seems to have been a lot of thought put into the design of this and some things, such as mesh side pockets and round compartmentalised hatch bucket were something that I would like to have on mine. The ease of deployment of the rudder also really impressed me although controlling it with my hands did not appeal – but then you need to as your feet are taken up with the pedals fitted to the drive. I can see why people who have them swear by them.

I launched first and sat about pretty stationary as Billy got in and set off, peddling away as I took a pic or two:

I must have been in an eddy or something as this threw me into thinking there was very little current and so I stuck a couple of lures out and paddled out. I drifted at an alarming rate as did my lures and I caught a moored yacht. I then disturbed the owners breakfast and had to bugger about to unhook from the mooring line. Still, he was fine about things and I had a notion of the current speed here and waited until I was into a clearer area before sticking the lines out again.

We paddled for a while – or rather I did as Billy sat back and peddled – it was a first for him too as he’d not fished from his yak yet.

Reaching our mark I tied off to a buoy while Billy tried to get the anchor to hold but the current was ripping through and so he tied off to another buoy further away than he’d intended. A pity as we had to shout to each other rather than just talk normally – and this was a social outing after all.

I was carrying 5 rods with me, the most I’ve ever taken as I wasn’t sure what it’d be like. My two coarse fishing match rods which are very fine and used for tiddler-bashing in the river, loaded with 4lb mainline, two 12lb class for trolling and a 7ft spinning rod with my 17 year old baitcaster. The current put paid to the original plan of float-fishing prawns on the light rods and so I chucked out the 12lb rods, now-dead prawn on one and ragworm on the other. I was using muppets on one rig and attractor blades/beads on the other, size 2/0 hooks and a running ledger rig. Which is all fine of course but Billy was not so preoccupied with such irrelevancies and was in:

And he was then in again.

So they were here then – but small. Then I got a few taps that I missed before finally hooking my first yak-caught Bass. Another tiddler but species number 14 for the year to date.

A quick photo and then back it went.

Billy was still catching, I was missing (frequent) bites, and soon he had a sizeable one. Then I had a third – a beautiful, shiny silver Personal Best! Excellent stuff. I had a couple more tiddlers in the boat, a good few bites (and some good bites too) and dropped a really heavy fish too which was a great pity (and too damned common for me). All too soon it was time to head back up river – I didn’t have long to fish as we had plans for the evening. Of course I had to try for one more fish and after a few minutes the rod tip went and I struck into what felt like a better fish…

A codling! I normally paddle a couple of miles out for these and here came one from a river. Still, it was only a pound or so and I released it to grow fatter.

We paddled back up river. The current had slackened a fair bit but was still against us and it took 2 or 3 times as long to head back to the launch point. I had a cranked shaft to play with and although I found it perfectly fine to paddle with I still got some soreness in my left wrist so it’s starting to point to poor paddle technique or perhaps an adjustment in feather being required. The WAFI’s (as I heard them called) were about and so we had to pay heed to them.

As we came back up towards the marina there was a strong smell of diesel and it seemed that some one had managed to spill a fair bit of it that had gone in the water. It was visible for quite a distance as it flattened the water out quite markedly. Anyway, back to the launch point I decided to have another ten minutes as my ‘last cast’ tradition and with the tide just about at the top I wasn’t expecting much sport. And nor did I get it – a few small knocks but no fish. I paddled in and loaded up having landed 5 Bass and a Codling (all on ragworm) and having had a very pleasant few hours indeed.