The Start Of My Yakking Year 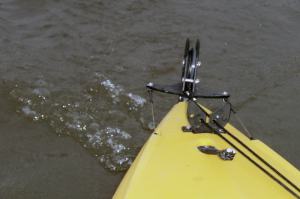 Home » The Start Of My Yakking Year

Three days into the new year and I finally managed to get out this morning. The whistling of the 30mph winds had kept me awake for much of the night and I wasn’t feeling at my physical peak (!) but as a husband I know better than to postpone an agreed yakking permission so after dropping my youngest off at nursery I got kitted up in thermals and drysuit, loaded the kayak onto the roof bars, grabbed my tiddler rods and finder and set course for Oulton Broad fearing the worst.

It was worse than tournament weather! For the broad to have a 1ft swell meant that the wind was going to be a handful and as I was intending to have another blast with my Pacific Action sail I felt it wise to stow the rods in the rod pod until I got around to fishing. Car parked and kitted up I fitted the sail and let the wind take me off the slipway and onto the broad itself. It did that without the sail.

Unfurling it and with the rudder deployed I took off. From an almost standing start I was moving across the water pretty sharpish. The picture will give you some clue as to the speed I was going;

I was somewhat surprised as I figured the wind being so strong should have been taking me quicker but I carried on out towards the middle of the broad.

BLOODY HELL! I came out of the shelter from the tree-lined bank and rocketed off! Sadly the GPS wasn’t connected up properly so I couldn’t get a speed reading but comparing it to last week’s sailing I’d estimate I was attaining 8mph+ and when I got hit by gusts I began to feel a little nervous – no texting today, I needed to give full attention. I crossed the broad both directions and then turned downwind again and fairly flew down the length of the broad towards the dyke entrance. Three pikers in a dinghy stood up and watched me pass, apparently gobsmacked! I didn’t even have time to enquire if they’d caught yet I was going so quickly.

What a blast. Once into the dyke proper I furled the sail and dropped the anchor down, plenty of fish were showing mid-water, around 3ft off the bottom but floatfishing was out – the float would be under all the time with anything less than a pike bung and I wasn’t after pike for once. I was on dual beam and most returns were coming on the 83 kHz window.

So it was on with a swimfeeder and lines went down…

Failing to get any bites I moved further down for a bit and then entered an inlet. Still nothing. I decided to paddle back the mile or so to my launch point and try in the boatyard. I wish I’d planned my morning better as the effort against swell and wind had me soaked inside the drysuit as I inched forward into the teeth of it. Not a great deal of fun. Especially as it was 3 degrees not counting wind-chill on face and hands (had my ushanka on to keep my ears and head warm, top kit) and the odd snowflake was landing on me. Still, I made it down again after 20 minutes or so and tried the boatyards.

I passed what would have made a good Christmas dinner on the way too:

Still nothing, I went back to the launch point, fetched the car and headed for the river I fished on Saturday at Beccles.

Having 2 hours of fishing time left now I used a different launch point to my usual one and am pleased I found it – a slipway and a 400m paddle to my mark in more sheltered conditions was a welcome change.

The local fauna was around in abundance too;

Tied off to a cruiser I stuck some groundbait down and blanked steadily for an hour, getting the occasional visit from my bird:

before trying another spot…

It must have been twenty minutes before the first bite. And I missed it. In fact, I missed 6 bites in all out of 7 – mostly shy bites but I had my swimfeeder snag and get pulled down onto the hook and bump one fish off. However, I didn’t blank as the one bite I DID manage to connect to saw me charged and rammed by this feisty little chap:

I played it a little and then swung it onboard. Around 1/2lb in weight and a solid, chunky fish this was the first Chub I have ever had out of the Waveney and only my second of the species ever. I must confess to being surprised! It was a lovely looking fish though and after the obligatory snap:

I put it back to swim away and carried on fishing for another half hour before packing up and heading home out of time and out of bait. Not the most productive start to my year’s yakking but a memorable one for sure; warp-speed under sail and a decent chub for the species list.