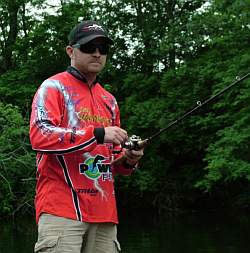 There have been so many times when I was out on the water and the fishing was horrible. I am talking not getting anything that even resembled a bite. Then all of the sudden I noticed something that ended up being the key to catching fish.

Sometimes what you think should work, based on every fishing article you have ever read, just does not seem to be what the Bass are interested in. It is in times like this, that noticing one very important detail can make all of the difference.

Slight Temperature Variations
Early one Spring I was out on a lake I grew up on. The water temperature was still in the upper 30’s. After hitting all of the textbook areas where the fish were supposed to be, given the conditions, I still hadn’t had a bite. It was then that I made a decision to take one section of the lake and just dissect it with precision.

Paying close attention to my electronics, I zigzagged back and for just looking for something to point me in the right direction. After going back and forth a few times I realized there was one little area, about10 yards square where, the water was 3/10th of a degree warmer than the rest of the area. So I spun my boat around and got in position.

With my boat sitting about 15 feet away from where the warmer water was, I grabbed a jig rod and went to work. Within just a couple of casts I had my first Bass. After a few more casts I had another and then another. Every fish I caught that day came from that one little area. In the summer months, finding an area that is slightly cooler can be the ticket.

Water Clarity or lack thereof
On a windy summer afternoon I was pounding the waters of a small Northern lake. The fishing was decent and I was catching Bass pitching jigs and Senkos around boat docks. After hitting all of the docks on a particular stretch, I kicked the trolling motor on high and was heading to the next little area.

After passing an area, that looked to be dead water, I saw a big swirl. I reached down and grabbed a rod with a lipless crankbait on it. With all I had, I rifled that lure through the strong winds that were blowing in my face. As I was cranking the bait back to the boat I noticed one area of water that was way dirtier than the rest of the lake. This area was approximately 10 feet wide and 30 feet long.

As my lipless crankbait entered the outside edge of the mud line, a Bass crushed it. After releasing that fish, I fired back towards that muddy water. Again, when that lure entered the dirty water another Bass drilled it.

I ended up pulling six or eight Bass out of that little area by the time the flurry was over. After everything had calmed down I decided to go investigate. After going back and forth through the area and watching my electronics the only thing I could find was that water was 2 degrees warmer than the water on either side of the mud line. There was no structure or cover to speak of in the area. It was basically just a flat, muddy bottom.

To this day, I am still not sure why those Bass were stacking in that muddy water. It may have simply been to use the reduced visibility as an ambush point. The water temperature really should not have been a factor that time of the year since the water was in the upper 70’s to low 80’s. Whatever it was that had them in that warmer muddy water, I am glad I noticed it.

A glimmer of hope
While fishing a tournament near Chicago Illinois myself and everyone else were struggling to catch fish from the over pressured waters of the lake we were battling. It seemed like no matter what anybody threw, the Bass just were not interested in eating it.

After a couple of unsuccessful hours of fishing the ledges where the Bass had been holding during practice, my mind started to really wonder what was going on under the water. During this time of brainstorming and mild confusion, I noticed something that was an absolute game changer.

While looking around at the other boats near me, the birds flying over head and the tall shoreline grass gently swaying in the breeze I noticed a silver reflection near the shore. Over and over I saw these small flashes of light. Thinking to myself “what in the heck is that” I moved closer to it. Once I was close enough that my eyes could understand what they were seeing, I realized it was tons of baitfish. Again I moved a little closer to the shoreline until these baitfish were within casting distance.

Once in range, I whipped a crankbait towards the flickering little lights and caught a keeper. A couple of casts later I caught another keeper. Over and over again I caught one keeper after another from the area around where are the shad were hold up. When it would slow down with one bait, I would throw something else in there and then it would get ate.

When the day was over I had another tournament win under my belt and two very sore thumbs from all of the fish I had caught. I am not sure how many total fish I had that day but I had something like 15 or 20 keepers. The most interesting part was no other competitor in the tournament that day caught a single limit.

Whether it is water temperature, bait fish, water color, wind ripple or current, paying attention to what is going in the water and around you will definitely make you a better fisherman.