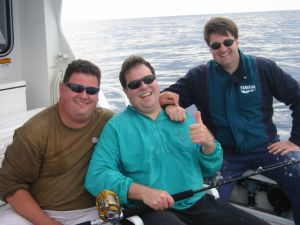 Standing on the Bundeena ferry wharf at 6:15am might not be unusual for some of you, however, for us the idea was met with some trepidation, we were heading out to the shelf to chase some tuna and hopefully lock horns with a Marlinâ€¦’dreaming we thought’ (after all this was our first attempt).  Things started looking up when out of the darkness emerged 10m of Aluminum fishing machine skippered by Roland Persson and ably crewed by â€œthe Swedish connection-Magnusâ€.

Once aboard the required comfort level was easily achieved, Roland advised what the day held for us and we set off in search of some live bait.  After about an hour with limited success Roland pointed the bow East and off we went.  Once we hit some good looking water, the rods were set, a couple of quality Pakula’s and some other fancy looking Christmas trees were considered adequate to do the job.  After a few minutes we had a multiple hook up of Striped Tuna, unfortunately we dropped all but one of these, which came aboard weighing in at a little over 4kg, not a bad start to the day.

As can be the case with trolling, the next couple of hours delivered very little, a little disheartening, but we were big boys, another Striped Tuna of around 2.5kg came aboard and the enthusiasm was renewed.  Over a light lunch and some fresh Sashimi we all agreed to continue on with the trolling in search of a giant beast, we all thought Marlin, but none of us were game to annunciate it!

Another hour or so and the shout came from the flybridgeâ€¦â€fishâ€, I think Magnus reverted to his native tongue, however, we understood, on a fishing trip, that type of excitement generally means one thing!  It was Bev’s turn at the rod and as he picked it up the mighty beast jumped and our hopes were confirmed we called it around 85kg of Striped Marlin and how awesome was it, she tail danced and jumped at least 15 times each one as impressive as the first.

The fifteen kilogram line was being stripped at a rate of knots with the beast heading East with no thought of returning.  It was an amazing sight, however with some thought our skipper decided it was time to head off after our quarry.  The steady pace of the aluminum machine allowed Bev to retrieve some desperately needed line and the fight was on!

Our striped opponent decided it was time to go deep and what ensued was 40 minutes of gut wrenching battle.  Bev was tiring and being a good skipper, Roland asked if Bev wanted someone else to take over, â€œwhen I’m deadâ€ was Bev’s reply.  Luckily it didn’t come to that.  The Marlin started to tire and Bev started to win back the precious monofilament as the sweat beading on his brow began to drip, we all new that it was only a matter of time until Bev boated his first Marlin and that knowledge was enough to keep our man going.

As the mighty beast surfaced we realized that our initial call of 85kg had to be out by 20-30kg, this baby was 100-120kg if she was a kilo and the team was jubilant.  Our Scandinavian friend quickly dispatched the tag and we clicked off a few choice shots, Bev then swam his quarry and with renewed vigor she motioned off to the depths.

The magnificent fish was gone to fight another day but the memory will never be forgotten.

Trollin with Roland, you betcha!  We will be back.

If you’d like to find out more about fishing with Roland, or would just like to drool over some superb fishing photographs, please visit http://www.allatsea.biz