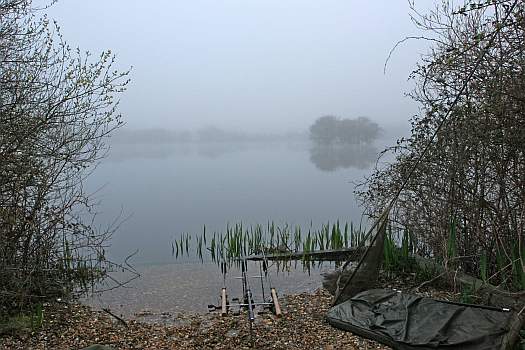 Things are really starting to happen…

I love April. It’s when everything, including the fish, start to wake up.

I knew it had been a busy month as some weeks I have found myself next to a lake on most week days, twenty in fact. Breaking these down, two were photo-journalistic days taking images of fellow Nash consultants then writing words for future features. Seven days were spent with customers, guiding, slightly more than I would normally put in, but due to the bad weather in March and being able to work on a few weekend mornings, I don’t feel I have overdone this. In fact, it’s worked really well. Two days were spent producing features; one was a tough session on Badshot Lea Big Pond for Tight Lines, the other a productive day on Lodge Pond compiling an Action Replay for Angler’s Mail. This left nine sessions where I found myself fishing for myself. These sessions were mainly overnight trips and totalled 107hrs, which averaged out at nearly 12hrs per session, and with my ‘big fish head’ back firmly on these didn’t disappoint

These sessions were mainly spent targeting a massive tench, yet this campaign is going rather slowly. The venue that I have been fishing isn’t easy and this spring the water level is very high, making it slow to kick into gear. Even the carp anglers are struggling, with just the odd stocky carp showing, so with three carp to 20lb 4oz and a 9lb bream to show for the four nights fished, I feel that I’m doing as well as any and that it’s just a matter of time before the tench arrive.

Three nights have been spent targeting big bream and although just one double showed in the first two nights, the third made up for things in a big way. With my time coming to an end at the venue, I decided to brave a cold easterly and bait in a big way with ninety balls of groundbait hitting the swim some seventy yards out. Leaving the swim to settle an hour before placing the rods on top, I only had to wait an hour for the first of four bream to grace my net and, weighing exactly 12lb, it was to be the smallest! The next came an hour into darkness and set a new personal best of 16lb 1oz, a fish of a lifetime if ever there was one. The other two weighed 13lb 3oz and 13lb 5oz, a red letter day to remember. All the bream came to 10mm Nash Monster Squid boilies, critically balanced with a small buoyant piece of corn, fished method style over Nash Talapia groundbait.

It’s not just bronze bream that have made this month one of my best ever as their smaller cousins, silver bream, have appeared –  record nudging ones, in fact. Fishing Mill Farm Fishery in West Sussex, I spent two days targeting these and in between the hoards of carp, the best 21lb 12oz, some very big silvers have graced my net. The first session produced six over two pounds, with the biggest weighing 3lb 1oz 8drams. The second produced silvers of 2lb 9oz, 3lb and 3lb 8drams. All these fish fell to 6mm pineapple Squidgees, hair-rigged on helicopter rigs with 2mm Scopex Squid Stick Method pelts fed through the feeder.

Looking back, I feel somewhat fortunate to have had such a great run of big fish, as most anglers haven’t been faring as well. The main problem has been the ever changing wind, a factor that I have always felt plays a big part in fish behaviour. This month I have just made the right decisions, something we all do from time to time. The high pressure, warm days and freezing nights have also played a part in poor daytime returns and, although it might fall well below freezing at night, I feel that this is the best time during these conditions to catch.

Taking a close look at the diary for May, things look likely to follow in a similar fashion. Let’s just hope the tench wake up and start appearing.