Signs to me that spring has properly arrived are seeing the first bluebells, the hearing of the first cuckoo, and the first outing after crucians. The bluebells hadn’t let the side down, stunning displays in the woods around Aldworth, Berkshire, well worth a visit, and don’t miss out The Bell in Aldworth itself, my favourite pub of all time! 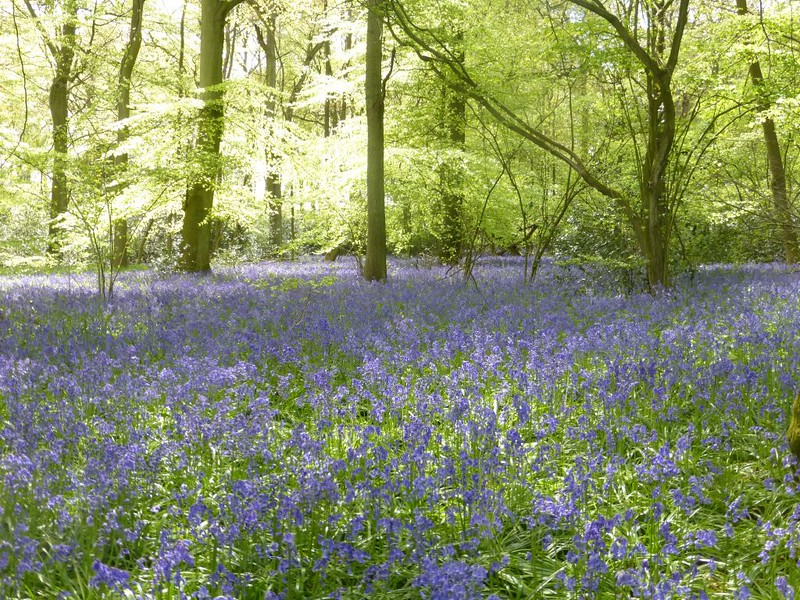 The cuckoo listening had also been successful, so two out of three so far, signs were positive, now all I needed was a crucian.

The weather hadn’t been in my favour for a visit to Marsh Farm so far this year, and still wasn’t perfect on the day I ventured down. The web-site gives detailed match reports in which crucians were starting to feature in numbers and a call to the on-site shop the day before gave me more encouragement with both lakes apparently fishing very well.

Those that fish this venue will know it can be a bit of a wind tunnel, even on relatively still days, so with gusts of up to 40mph being forecast I made sure I had a few pegs for the brolly before setting off from home.

Settled into my chosen swim by 7 am, one float rod, and one feeder rod cast out, I waited in anticipation of seeing that classic flash of gold on the end of the line. Watching a float and a rod tip bounce around gives ample time for contemplation of life, and as the fish were initially very reluctant I had ample time to do this. In my current situation this isn’t always the best thing to do, as some readers know, I was diagnosed in February 2014 with kidney cancer.

Fifteen months after surgery, one kidney lighter and undergoing treatment for the cancer that has spread to my lungs, life is still reasonably good…if you exclude the side effects of the treatment, the coming to terms with the fact that IT project management can not be done as a part-time job, the loss of income accordingly, and the watching your family struggle to understand why fate has dealt such a vicious hand. However, with modern medicine the survival rates are good, and I am determined to be in the statistic that says I have a 50% chance of still being alive…and fishing, ten years from now! I don’t think the statistics actually mention fishing, but I am sure you understand my intention! Too much to take on board at times.

Anyway, contemplation was kindly interrupted by the tip of the feeder rod giving a more pronounced bounce than a gust of wind could create and within a couple of minutes my first fish of the day was on the mat. A small tench of just over two and a half pounds, now if this had been a crucian I would have been more than very pleased, however, I was not overly disappointed as it meant a possible blank had been avoided. A second tench soon followed the first, larger this time at 3lb 14oz, maybe not such a bad day ahead after all. 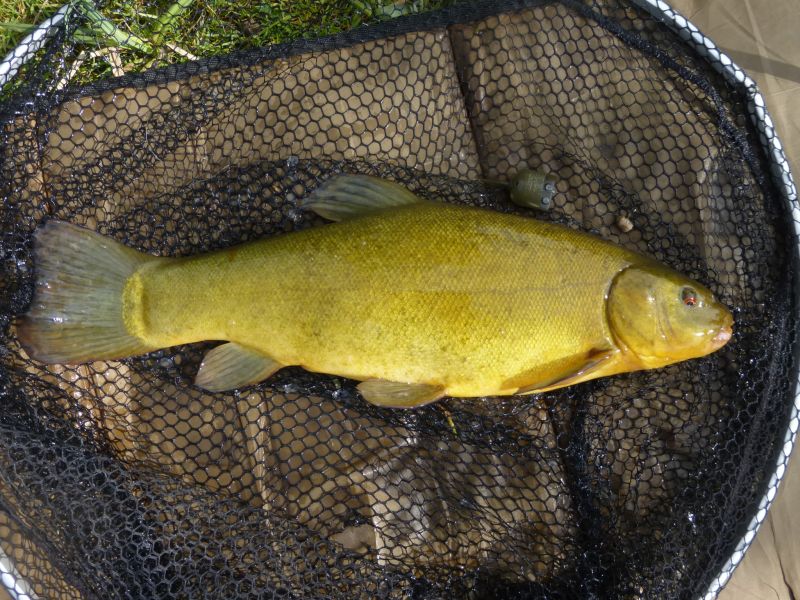 Float fishing was proving nigh on impossible in the wind, I had given up trying to get away with using a pole float…spotting the float itself was becoming similar I suspect to trying to locate a U-boat periscope from the air in the middle of a stormy Atlantic in 1943!! Even a switch to a quite thick bodied waggler did not make bait presentation any easier. 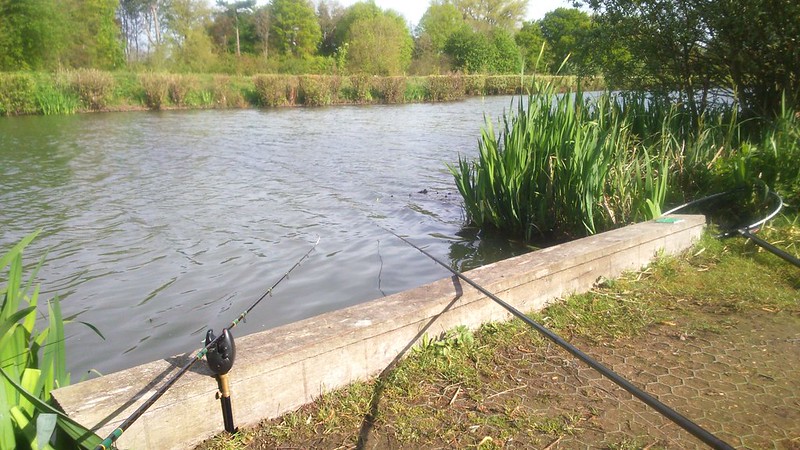 Another two tench each side of the four pound line on my scales fell to the feeder rod before a short adjournment was required, involving a 50 yard chase of my unfettered brolly as it was picked up by a gust wind and swiftly propelled along the lake side. Fortunately I was able to catch up with it just before HMS Brolly attempted to undertake its maiden voyage across the other lake!

Being that I was catching fish on feeder fished pellets, and my float rod had been abandoned, the local robin population decided that as I was obviously going to have maggots left at the end of the session, I should feed both them and their young. 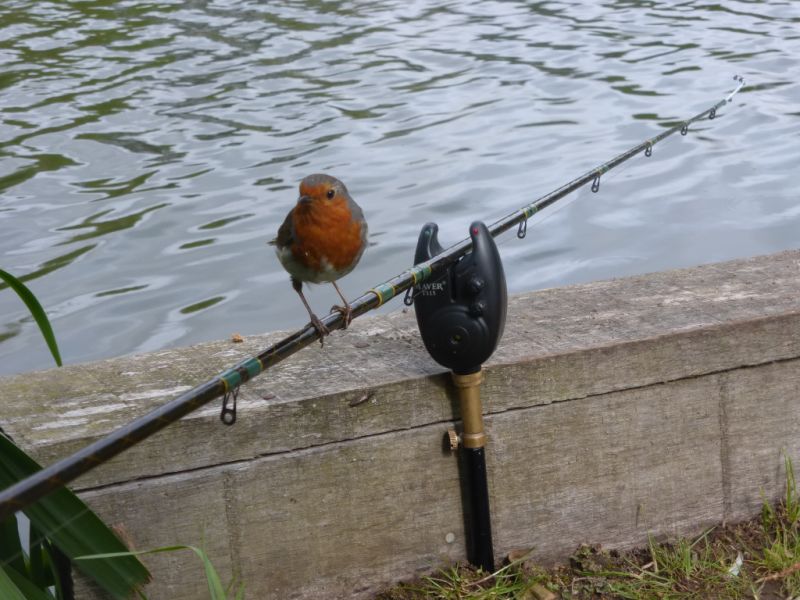 A short break from fishing, I took a stroll to the on-site tackle shop on the way talking to two of the other five anglers who were fishing the same lake. Whilst I would have much preferred to have been float fishing I was able to at least gain encouragement in that I was the only one of us who was managing to catch much of anything at all, total for the other four was a single small roach.

Returning to my swim a few quid lighter….I’m sure I am not the only angler who cannot resist buying at least one item when in a tackle shop, whether you need it or not…I fished on for another hour or so and another couple of tench, before the gusts of wind started to contain raindrops and I decided to call it a day.

Last fish of the session was also the largest, at 4lb 6oz, no crucians, but seven tench in not ideal conditions was not a bad return for the morning. 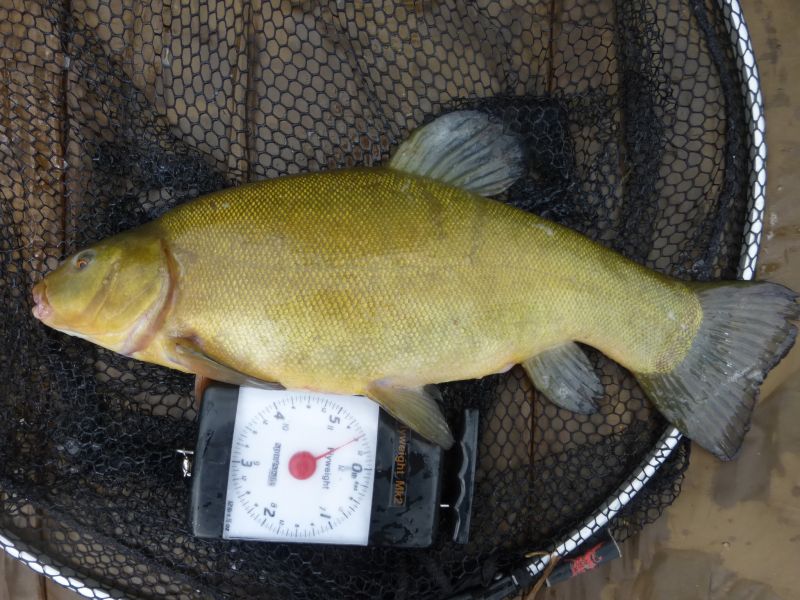 Just a footnote on the subject of kidney cancer, mine was picked up almost by accident, as part of a routine scan for another ailment. Apparently this is very common now, which is good news, as it means many patients don’t get to the stage where the classic indicators are encountered. Some of the early symptoms, high blood pressure, back ache, tiredness, and weight loss are similar to those displayed by other illnesses, …so, reader, make sure you have a good GP who is prepared to investigate all avenues when you go to see them with any of these!! I make no apology for including this in a fishing blog, if my writing serves as a nudge which then leads to an early detection and therefore a vastly improved survival chance for just one person, then I’ll be happy to have helped someone.