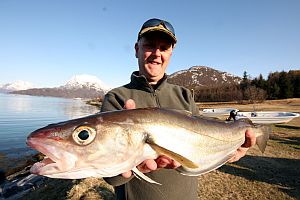 Luton’s Lee Johnson’s caught plenty of cod during the inaugural Skipper’s Challenge run out of Andorja in the Troms area of northern Norway. But his most memorable fish was this personal best 4lb whiting.

Lee, who runs a fishing club from his pub, fished alongside skipper Ray Martin, who runs the ‘Shady Lady 2’ out of Southend, with fellow anglers Nick Coster and Stephen Collingridge making up the successful quartet.

They each won themselves a holiday care of sponsors www.tackleboxholidays.co.uk .