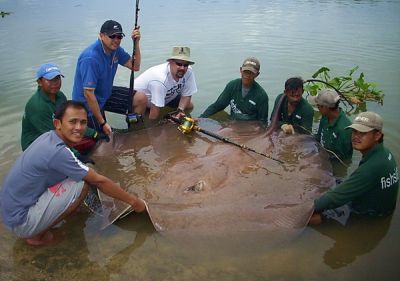 News from the Fishsiam.com team

{My apologies for not posting this earlier. Rick sent this report back in October, but it got lost in a mountain of emails…..Ed}

Since my last fishing report we have caught some extremely big fish.

A few months ago, we were visited by two American clients who fished at the Maeklong River for Giant freshwater stingrays.

Fishsiam was also visited by two European anglers who also fished on the Maeklong River and caught a 1.9m Giant freshwater stingray estimated to weigh 190kg’s+.

Our most interesting capture for some time saw UK newly weds Nigel and Caroline visiting Thailand for their honeymoon. After fishing for two days at Bungsamran Lake in Bangkok and catching a large haul of Mekong Catfish to 50kg’s, the newlyweds moved to the Maeklong River. Early in the day the recently married couple hooked an unseen monster stingray which was lost after a battle of almost three hours.

Finally, if you’d like to find out more about Jeremy Wade’s visit to Thailand to film for River Monster, please take a look at the full report here http://www.fishsiam.com/river-monster-jeremy-wade-thailand-fishing.html