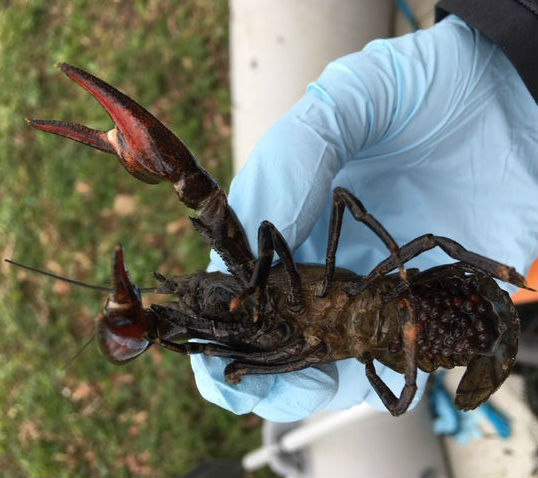 A partnership project to conserve native white-clawed crayfish in Derbyshire has completed its second successful year with the removal of 2,000 non-native invasive signal crayfish from Markeaton Lake in Derby – double the amount it removed in 2018. 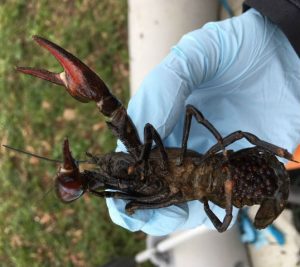 The Signal Crayfish Removal Project led by the National Trust, aims to support the recovery of white-clawed crayfish by preventing signal crayfish from expanding into the upstream Markeaton Brook and Kedleston Lakes where the native species are known to be found. Native white-clawed crayfish have been in decline since non-native American signal crayfish escaped into UK waters in the 1970s. These larger, invasive crayfish outcompete native species for food and habitat and carry a disease fatal to the UK species.

Louise Hill, Biodiversity Officer at the Environment Agency in the East Midlands said:

“Last year the project in Markeaton Lake saw the capture of around 1,000 signal crayfish. This year we have doubled this to 2,000, which is a great result. After two years there are indications that the numbers and size of the non-native crayfish are reducing.

“We have been working with the National Trust, Derby City Council, Derbyshire Wildlife Trust, Earl of Harrington Angling Club, University of Derby and Nottingham Trent University and next year sees the final year of the project.

While the signs of change are encouraging, we still have a long way to go until we are satisfied that our native crayfish populations are fully protected. We are also looking at a number of measures to further secure the future of the White-clawed crayfish, including the creation of ‘ark’ sites to relocate them to areas where they will be free from invaders.”

“It’s a race against time. We must prevent the invasive signal crayfish from reaching Kedleston Lake where we believe we can protect the native White-clawed crayfish with barriers and ongoing trapping. Ultimately, we are looking for an ‘ark’ site to move some of the native crayfish to.”

White-clawed crayfish, named for the pale colour of the underside of their claws, are the country’s largest native freshwater crustaceans. Generally growing to 30 – 40mm in length, some can live up to 12 years and reach 120mm long from tip to tail.

Invasive species pose a serious threat to our native wildlife and cost the UK economy £1.8 billion a year. Everyone can do their part to prevent the spread of invasive species and protect native ones by taking care to follow the biosecurity steps of thoroughly checking, cleaning and drying their clothes and equipment any time they have been in the water. For more information visit the Non-native Species Secretariat website.