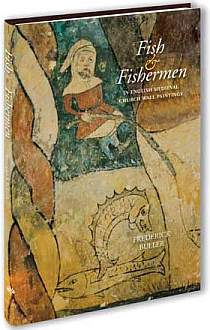 A curious and rather unusual book that will fascinate anyone interested in Angling history – of which I thinks there’s a few on Anglers’ Net (well, maybe just me and Vagabond!). The scope of this research is, however, rather narrow and I was amused by a line in the frontispiece which described the book as ‘a definitive text for anyone with an interest in the history of fishing and medieval paintings’. Now that’s got to be a small demographic!!

Fred’s starting point was in hunting down the earliest depictions of angling in England. Many regard the woodcut from the Treatyse of Fysshynge wyth an Angle (1496) (my avatar on Anglersnet) as one of the earliest images. And whilst it IS the earliest image in print Fred’s research finds pictures of anglers up to a couple of centuries earlier.

The beginning for Buller’s quest was being shown a photograph by one Frank Plum (no relation – but a curious coincidence) of a church wall painting depicting an angler.  Fred realised that the age of the church (circa 1100) – might mean this picture would be one of the earliest in England of someone fishing. So starts a series of enquiries which are repeated throughout the book as Fred goes from church to church, tracking down and photographing images. Experts in medieval dress are consulted for their opinions as to the date various items of clothing were in vogue (so as to give a rough date for the figure painted) and the late Alwyne Wheeler asked his opinions to identify the fish being portrayed.

Allegorical paintings were common during the Middle Ages – it was a way to convey the church’s message to a mainly illiterate population. Many themes are repeated in almost every church and one very common one was the story of St Christopher. This was always prominent – opposite the main entrance as it was meant to be the first image parishioners’ saw on entering the church. Surrounding the image of the saint would often be found pictures of men angling and, by his feet, fish of various species – and it is these images that the book focuses on.

One surprise is how often the fish are easily identifiable – and another is how often the identification is of a sturgeon – a fish now absent for England’s rivers (apart from the VERY rare visitor). The location of the church often influence’s the images, too – so, for example, sea fish are often depicted in coastal churches.

The custom of church painting ended with Henry VIII’s dissolution of the monasteries which also ordered the destruction of popish images. In effect what usually happened, however, was that the paintings were simply white washed over with lime. This process acted as a preservative to enable many to survive intact, though many more would be around to this day had it not been for the Victorian fashion of removing all plaster in country churches to reveal the stonework. Thankfully, enough have survived and this book is a worthy record of one small part of these paintings

CLICK HERE to view this book on Amazon UK