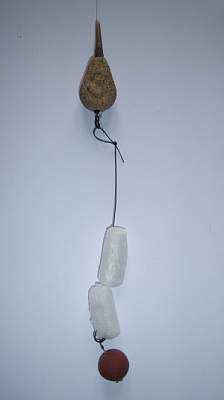 Anglers often go to extremes not to lose their leads when fishing, but this whole concept works against them because a carp will use the weight of the leads and the softness of mono lines to set a continual bounce on the line between the hook and the tip of the rod which can either snap the hook length or pull the hook.

Anglers are beginning to realise that heavier leads are needed to set the larger hook sizes to the bigger carp, but often do not realise that it is essential to drop the leads.  The use of larger inline leads up to 5oz can cause problems;  when the carp is hooked and the angler lifts into it and tightens down, the lead can travel along the leaders and become trapped at the knot between the leader and mainline, which again can pull the hook or snap the hook length undoubtedly causing mouth damage.

More and more, double inline leads are being used which are not always safe even though they are supposed to release.  Anglers fishing a normal UK set up (see first photo of this article) will put a second lead behind the inline set up, passing the leader through that lead as well so that there are two captive leads on the leader.  The carp can end up dragging these double leads on a crack off or snap off, resulting in mouth damage and even death.

I am constantly thinking of ways to make rigs safer for the carp and came up with the idea for my Distance Piggyback Dropper when fishing larger lakes and rivers at a distance in France, where I have not been able to find a ready supply of large leads and because foreign leads have variable sizes of inner sleeves which do not necessarily fit UK swivels.

This set up works just as well on lakes where there might be high winds and waves and also on fast flowing rivers when even a 5oz lead does not hold bottom.  There seems to be an optimum weight of 12oz for a stack which allows the tightening down to the lead without moving it on the bottom and the stack can be anywhere between two and five leads.  Both the piggyback stack of inlines and the double stack on the clip are designed to drop the leads on the take and the carp that I have landed using these rigs have not suffered mouth damage.

These rigs can be used on on any size of water where weather conditions dictate the use of larger leads.  They are meant for use in a baitboat or ordinary boat delivery, but not for casting.

When fishing lakes at distance, much of the time there are gravel bars, mussel beds, uneven lake bottoms and on occasions obstructions.  Using the Distance Piggyback Dropper rig, the lead is instantly dropped on the take and the fish immediately rise to the surface.  Because the carp head for the surface straight away, a cut off on an obstruction can be prevented.  The carp fight for a relatively short period because once the lead is gone they tend to give up very quickly and it becomes much easier to play and land the bigger carp on tricky waters, even where a boat is being used to recover the carp

So… here’s the component parts needed to make the rigs;

This set up is limited, for distance and conditions, to the size of the single lead available

An alternative is to use a stack of leads.

Here’s a selection of leads which can be used to form a stack;

A size 8 swivel will not fit the sleeve in the Continental leads. – The tail of each insert should be longer rather than shorter.  This holds the stack together better.

Putting a piggyback stack together;

Tail rubber – Low profile 30lb fluorocarbon leader –  When engaging the swivel and placing the tail rubber, the leader passes over the top of the leads, NOT through the leads –  Size 8 swivel greased and pushed into the English lead –  Q ring

An alternative set up

Component parts;  Cut clip –  Cut tail rubber – 2 key rings –  2 x 3oz leads – any shape of lead which is normally used with a safety clip can be used –  Leads connected together with one key ring, second key ring attached to the first key ring

After the take the components come apart

Fishing Holiday in France at Vaux