Whilst the summer months will find me fishing lakes mainly in pursuit of such as tench and crucian carp, the final three months of the river fishing season will see me more often than not on my most favourite of places to fish, small streams. It might be the upper sections and carriers of the Kennet, or some of the small brooks that I have access to, one very local to me, the Emm Brook. So local that I have the fortune to be able to fish it from the bottom of the garden if I’m feeling very lazy!

Inspired by reading “Small Stream Fishing” by the late David Carl Forbes in the mid-1970’s, I think my angling really started in earnest on a tiny beck in the Lake District, Black Beck. Upstream worming was the tactic used for the plentiful small trout in the beck, so narrow that I could easily, and frequently did, get the tip of my 9’ 6” rod caught in the bushes on the opposite bank!

The Emm Brook is somewhat similar, although not quite the mountain stream type fishing, it is just as narrow in places, making it a challenge to fish, and its size means it is mainly ignored by any other anglers.

Anyway, waffling over, I had a couple of hours to spare on the last but one day of the river season, and half a pint of maggots, so a wander along the brook with the same rod that I used on Black Beck around 40 years ago. I have had chub to 2lb 12oz from here in the past, not a big fish, but when it comes from a stream that at times you can step across, something of that size is quite stunning!

I wasn’t doing the lazy option today, instead of the bottom of the garden I was about a half mile further downstream where the brook flows through a small area of scrub and woodland. After feeding a few maggots in the first trot through saw success, not a chub, but a little perch of around 4oz. A lot smaller than my season best of 3lb 5oz from the Kennet, but just as eager to eat anything it came across and just as stroppy. 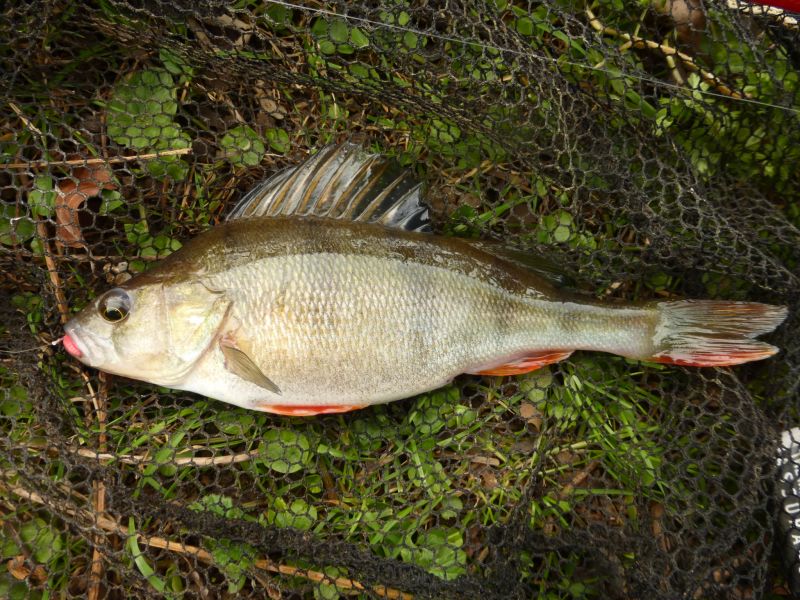 With a stream of this size it is rare to get more than just one fish from a swim, so time to move, not far though, another 10 yards downstream another little feature was found, a shallow riffle running into a slight bend with deeper water….deeper meaning it was all of a foot deep. 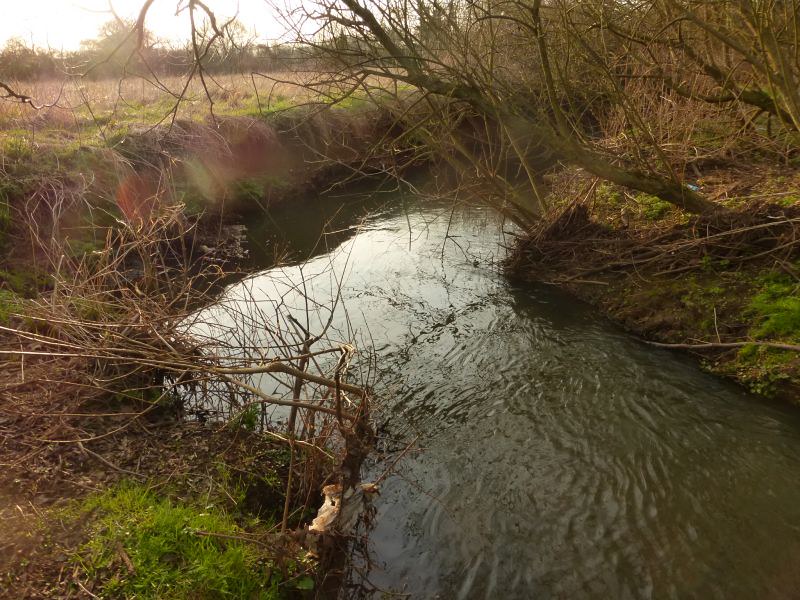 A few free maggots, followed by a baited hook, and second species of the session, a little dace not much over 2oz. This caused me a flutter of excitement….first dace I’ve caught in the brook for a couple of years, hopefully they are making a return. I’ve spoken to a couple of anglers who used to fish the Emm Brook in the late 1950’s and back then several dace of over a pound were captured !! 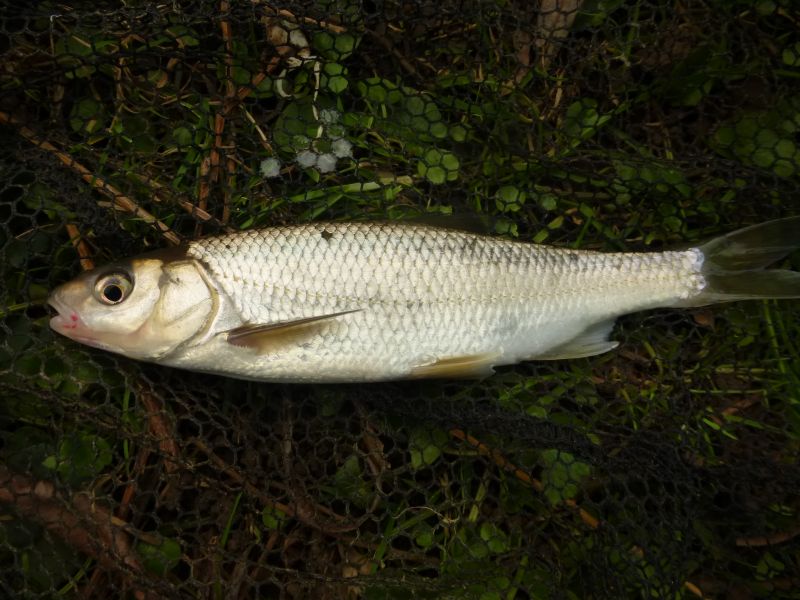 Before shifting further downstream I let the float drift through the deeper bit a couple more times, and on the third trot, it disappeared very swiftly….the strike being met by the very definite thump of a chub. Fishing with a 2lb hooklength in a very small swim I had to be careful to keep the chub away from any tree roots and after a short scrap my first chub of the session was in the net, a well conditioned fish of just under 2lbs. 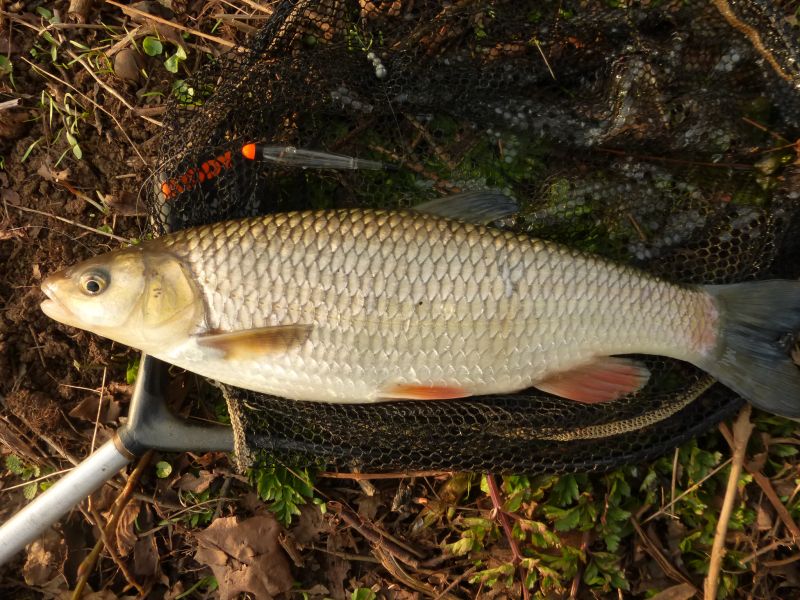 Third swim was a decent pool of about 10 yards in length, I guess around 18” deep and under a roof of overhanging bushes. Having had roach to over a pound from here before I was hopeful of a similar return as I flicked in a few maggots. 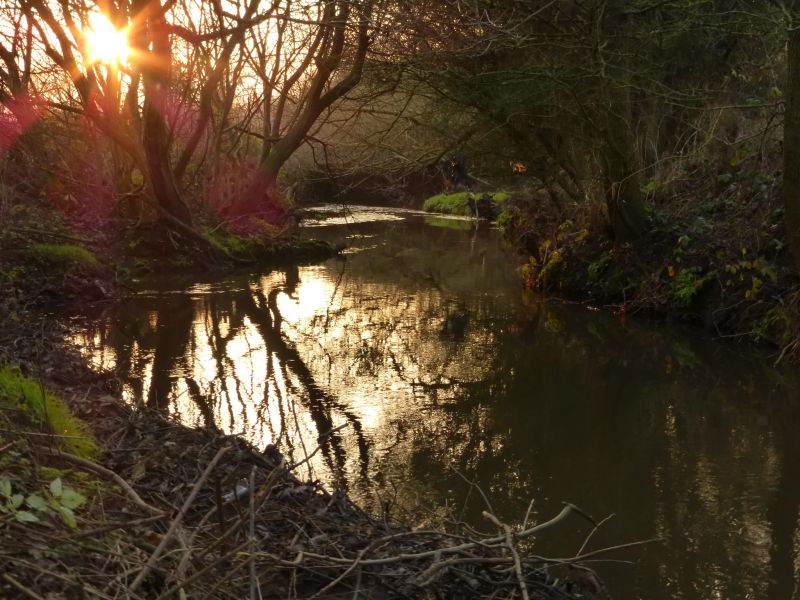 Not to be this time, first trot through the float shot under and second chub of the day was attached. This one decided to be a trout, splashing through the whole swim before I was able to persuade it into the net. A very portly fish, similar in shape to some of the 6lb+ fish that I’ve seen caught in the Thames and Kennet this winter….however this one….just 1 lb 6ozs! 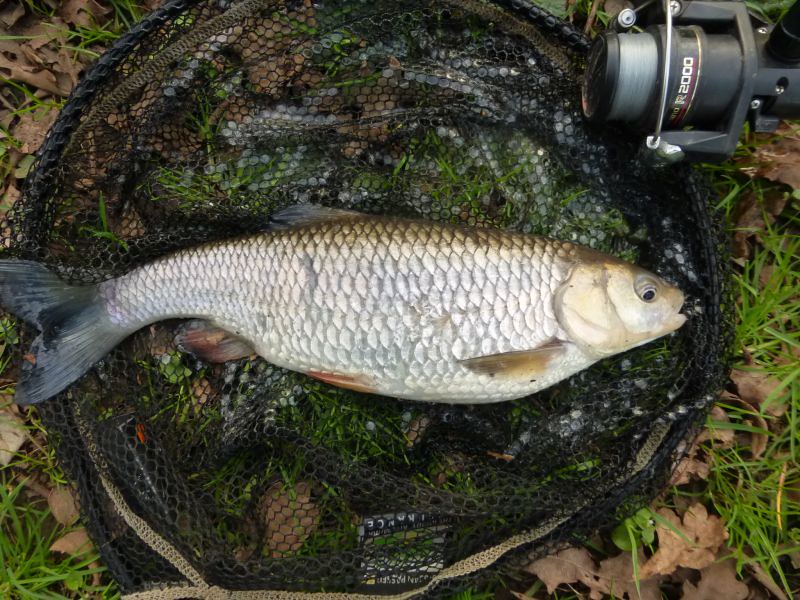 Final swim of the day, the light was fading, and I couldn’t actually get much more downstream as a minor road….the M4 motorway, blocked further progress! This was a tough swim to fish, only a short trot as it was a near 90 degree bend to my right, so I could let the float go perhaps 10 feet in total. 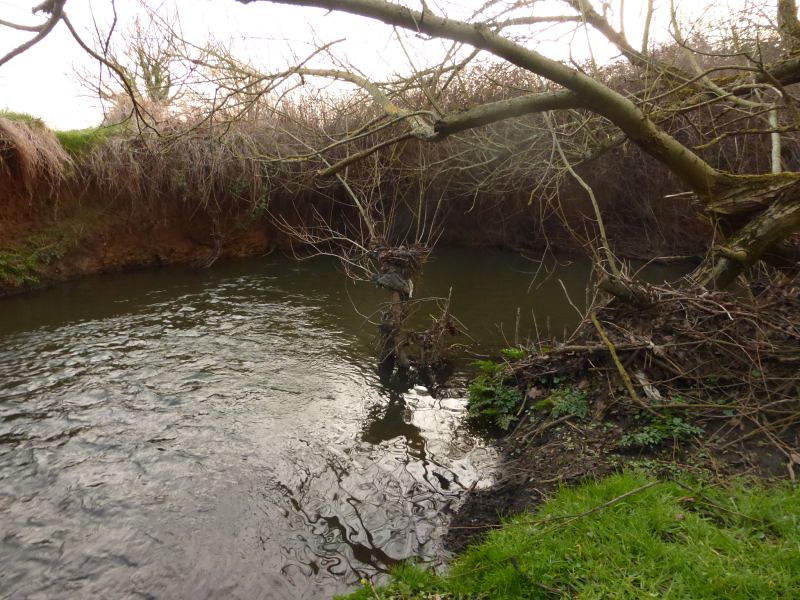 A few maggots dropped in, the float then followed them round the corner and I found that by letting it go a few feet downstream and then slowly bringing it back I could get it into a small slack on the inside of the bend. I missed the first bite, but not the second, as chub number three chomped on the maggots. This one managed to find the tree roots just in front of me, fortunately I was able to persuade it back out and eventually into the net. A good fish for the brook, actually a very good fish, 2lb 11oz, my second biggest chub! A very pleasing end to a couple of hours wandering the banks of a brook that most anglers wouldn’t give a second look at. 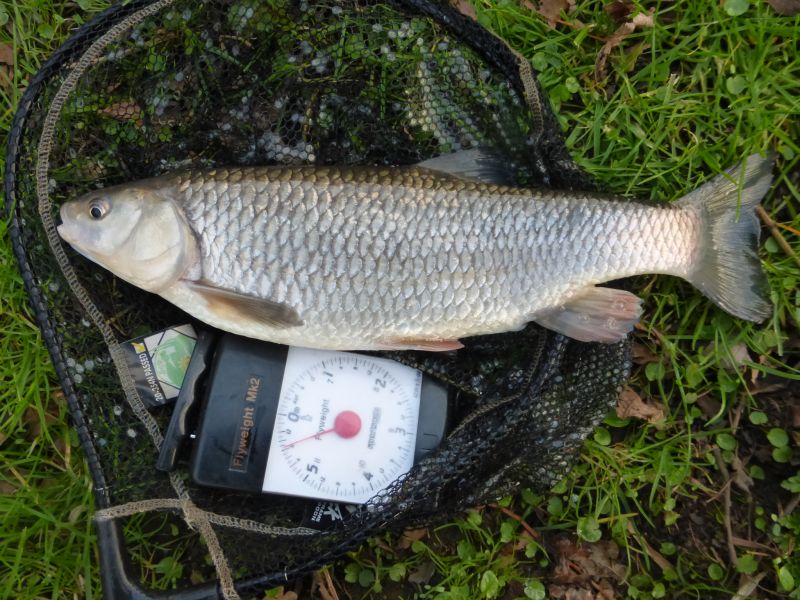