Bright and sunny - though felt surprisingly chilly in the shade and into a stiffish breeze.

I've had a trip here every June since 2014 and over the past 6 years haven't failed to get  one (usually several!) of the lakes famously big crucians (even getting a PB last June). So it was more in expectation than hope for a repeat performance. I had reckoned on picking a Monday would find the venue a little less busy - a total miscalulation - the place was rammed and dropping into the only free swim on the railway bank was a little deflating. To make matters worse little was being caught - not that I was unduly worried as I intended to fish well into the evening - often the best time AND return the following morning after a kip in the car. By 9.00pm, however,  I'd had just one (descernible) bite resulting in what would prove to be the biggest tinca of the session. Not a hint of a crucian - least not that I could detect with the heavy chop on the water. Bites did pick up a bit as it got dark - but it resulted in just more tench. Plan A was thus abandoned and at the allotted kicking off time I nipped next door instead of having 3 hours of fitful sleep in the car! 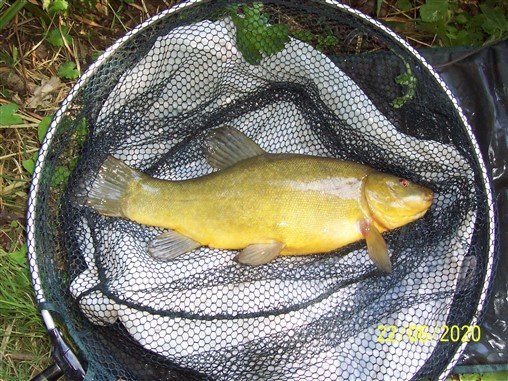