The Angling Trust has announced a change of leadership for Team England Fly Fishing’s squad that will compete in the 39th FIPS Mouche World Championships which will be held in Tasmania in November. 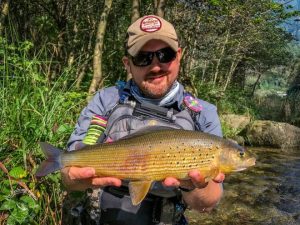 One of England’s most recognised and successful anglers, John Horsey was appointed as manager in September 2018 was expected to lead England into the competition. Due to unforeseen personal circumstances John has resigned from the role with immediate effect. Angling Trust moved swiftly to find a replacement and are delighted to appoint another one of England’s most successful and experienced anglers in Howard Croston. Howard will combine his role as a team member with that of the manager and will be assisted by fellow team member Lee Bartlett.

Croston, 42 from Manchester has extensive experience at the highest level having represented England on 21 occasions. His resume includes caps in bank, boat and river Home Internationals and in addition he has 3 European and 12 World caps to his name. He was part of the gold medal team of 2009 and bronze medal team of 2014 while his best individual performance was in Slovenia 2012 when he finished 4th, narrowly missing out on a bronze medal.

Howard said “I have always been very proud to represent England as a competitor and am relishing the challenge of also taking on the role of fishing captain/manager for Tasmania, as with any WFFC it will be fiercely contested and down to the finest of margins. The host nation has made exceptional progress over the last few years in all aspects and will be favourites on their home waters along with the likely suspects of the top European teams and the constantly improving USA.”

“That being said England’s strengths lie in boat fishing and this year’s format should suit our skill set well. We have a motivated team of skilled anglers, all bringing something different to the table that should hopefully let us push for a medal at this event.”

Ben Thompson of the Angling Trust said “The loss of John as manager is undoubtedly a blow, his knowledge and experience of the FIPS Mouche events and in particular Tasmania would certainly have given England an advantage going into the event however, we understand circumstances change and we wish John all the very best in the future. We are delighted to have appointed someone of the calibre of Howard Croston, Howard brings a wealth of experience and we have no doubt that the team are in the best possible hands. We have high hopes that under Howard’s leadership the team can head to Tasmania and compete for medals and we wish Howard, Lee and the squad the very best of luck.”

The World Championships will take place in Tasmania from the 30th November and conclude on the 8th December 2019. The host nation have a dedicated website for the event which can be found at www.wffc2019.com