January 1st was the start of what I hoped would be yet another good year for fishing. Last year had brought four new personal bests across various coarse species and so I hoped for more to come. I'd started a little campaign after Christmas to firstly catch a carp in the Christmas period, but failed,
Read More
Having never caught a Bream over 3lb, as you may expect, the thought of a double-figure fish was mind-boggling! Teamed up with my dad, we decided to tackle the North West’s prolific 40-acre Redesmere venue, where specimen carp, tench, bream and pike reside in numbers, and where my dad has already banked several bream over
Read More
My year started well I guess. 2nd of January, rather cold with snow on the hill tops as we drove to a day ticket water about an acre and a half, known as Turner’s Pool. The session went well, with all of us catching fish into low double figures. The highlight of the day was
Read More
Our party had been to Mequinenza, an old Spanish mining town where the rivers: Ebro, and Segre converge, a few times before, to fish for catfish and carp. Our apartment for this trip was situated across the river from the Bavarian camp and has its own jetty for launching the hired boats from. We found
Read More 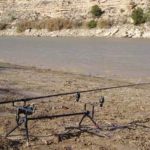 A surprise return trip to the River Ebro for my dad had been in the pipeline for a few months since my return from a work experience trip in the summer. All was well until just 48 hours before our departure at Liverpool; we had our trip cancelled by the company, which meant that the
Read More