Anglian Water has been ordered to pay more than £156,000 for polluting a Northamptonshire brook with sewage.

In a prosecution brought by the Environment Agency, Leicester Magistrates’ Court fined the company £146,000 and ordered them to pay £10,676 in costs after it found the company’s negligence and lack of maintenance were behind a number of failures at the Yardley Hastings sewage plant.

The pollution occurred over 2 days in August 2016, when at least a kilometre and a half of Grendon Brook was contaminated with sewage. 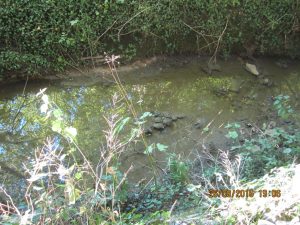 Tests carried out by Environment Agency officers at the time showed levels of ammonia were 20 times higher downstream – enough to be extremely toxic to fish, invertebrates and other aquatic life.

The pollution was caused by various failures at the pumping station, which takes in raw sewage and transfers it to the main site for treatment. The pumps became air-locked and stopped working, causing sewage to back up in the storage tank, which filled and discharged into the nearby brook. Alarms which should have alerted staff to the problem also failed to sound.

Investigations found the faults were due to a lack of maintenance – and although Anglian Water had undertaken three maintenance visits, they had no records of the affected parts being cleaned or maintained in the year leading up to the incident.

The pollution was reported on 24 August but wasn’t acted on, and the company had no record of the report being made. An alarm triggered the same day to indicate a problem as there was no flow from the pumping station to the main sewage works, but this was mistakenly closed down without being resolved.

The pollution continued intermittently for two days until it was noticed and stopped on 26 August – but this could have been done sooner if earlier reports had been acted on.

Anglian Water pleaded guilty to breaching the Environmental Permitting (England and Wales) Regulations 2010 and the Water Resources Act 1991 in the case heard on Thursday, 12 September.

The company’s environmental permit only allowed the site to discharge into the brook in storm conditions or in an emergency, neither of which applied at the time of the pollution.

The permit also required Anglian Water to maintain a 24-hour alarm system in case the pumping station failed or broke down, and a separate alarm to alert staff when the emergency sewage storage tank overflowed into the watercourse.

But the company only installed this second alarm in October 2016, after the incident – and 20 years after being required to do so by the permit.

Earlier this year, we pledged a tougher approach towards water companies that don’t live up to their environmental responsibilities, and this case proves that we will hold them to account when they pollute the natural environment.

It’s our job as a regulator to protect people and wildlife, and we will take action when they’re put at risk.

In mitigation, the court heard that Anglian Water self-reported the pollution, cooperated with the investigation, and that there was no evidence of dead fish or invertebrates in the affected stretch. The company has since taken steps to fix the faults and to clean up the brook.

In the latest water company performance report, Anglian Water was given 3 out of 4 stars – requiring improvement to reduce their impact on the environment.

Anyone who suspects a pollution is urged to report it to the Environment Agency’s 24-hour incident hotline by calling 0800 80 70 60.