The Angling Trust is pleased to announce that this years RiverFest qualifying matches will feature five new venues in a total of 24, which will see 1,440 anglers competing for a shot at the £12,000 top prize.

The new venues are the Warwickshire Avon at Warwick and Stratford, the Thames at Clanfield and Culham and the Tidal Trent from Laughterton to Dunham.

“The competition just keeps evolving and I’m delighted with the response we’ve had from anglers all over the country since the first RiverFest in 2013,” said Angling Trust Ambassador and competition creator Dave Harrell.

“We’ve looked closely at all the qualifying venues and listened to what anglers have asked for in terms of new venues. I would point out though that we haven’t closed the door for the future on any venues we have used previously. We just felt it was time for a few changes.”

As it currently stands, subject to all tickets being sold, RiverFest 2016 will see 10 main prizes in the final ranging from £500 for 10th place, up to £12,000 to the winner. Section prizes of £250 will also be paid out every six pegs on both of the final days. There will also be a teams of three competition run alongside the main event, made up of the three anglers who get through from each of the 24 qualifying matches.

Last year’s winner, Tom Lane said: “It’s the competition that all river anglers want to win and I’ll be going all out to try and become the first angler to win it twice. Hopefully, I’ll make it to the final again for starters!”

Applications for the 60 peg qualifiers will be invited towards the end of March, with an entry period of three weeks. A computerised random draw will then be made to establish who fishes where.

The final will take place on the River Wye at Hereford over the weekend of 19th/20th November and the same venue has been booked as a reserve weekend on 26th/ 26th November.
Spectators will be welcome to watch the final, free of charge and there will be a bookmaker present on both days for competitors and public to have a flutter. 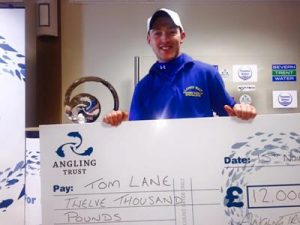