Whilst the Angling Trust welcomes the action by the water regulator Ofwat against Southern Water for its deliberate and systematic attempts to cover up their latest pollution incidents, we are disappointed that the rivers and environments that have been affected will not be receiving a penny piece to help repair the damage to the habitat for fish and other wildlife.

Instead, Ofwat is allowing Southern Water to get away with a reduced fine by handing over a £61 rebate to each of its customers over the next five years. This will cost £123 million that could have been invested in improvements to the wastewater infrastructure.

Not only have Southern Water misled the regulator, they’ve misled both the Environment Agency and the public. The Angling Trust fully expects the Environment Agency to bring forward rapidly a criminal prosecution against the company and hopes that the further penalties will include substantial compensation to be spent on all the affected rivers, streams and water courses. Such compensation should have been demanded by Ofwat as part of its responsibilities as a regulator

While Ofwat has levied a fine amounting to £37.7 million, it immediately reduced the amount Southern Water will pay to a mere £3 million as recognition of the commitments Southern Water made to compensate customers. 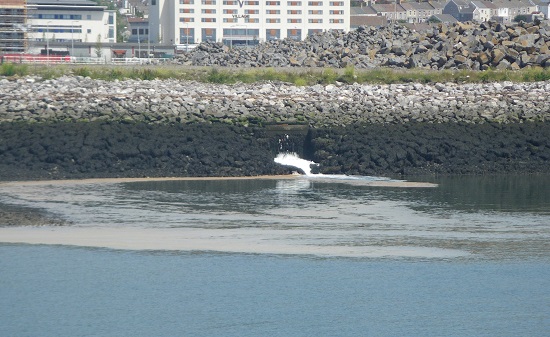 Stuart Singleton-White, Head of Campaigns at the Angling Trust said:

“Although some of the £123 million customer rebate committed by Southern Water is connected to other underperformances by the company not related to the breach, it is clear that the environment will once again be the loser. None of this money will address the long-term environmental damage Southern Water have visited on our rivers and the fish populations they support. Instead, customers are being bribed with rebates on their bills with the support of the water regulator who has consistently failed in its responsibilities to the environment which the water industry is licensed to exploit.”

In their report on Southern Water, Ofwat go on to say:

“Southern Water has deliberately misreported data to us about the performance of its wastewater treatment works. We have also concluded that it has failed:

to have adequate systems of planning, governance and internal controls in place to be able to manage its wastewater treatment works;

to accurately report information about the performance of these works;

and to properly carry out its general statutory duties as a sewerage undertaker, to make provision for effectually dealing with and treating wastewater.”

Ofwat also criticises the company for failing to make adequate investment in updating its wastewater infrastructure, yet it’s not using this opportunity to secure the investment needed to protect the environment from future pollutions.

This gross and deliberate negligence by Southern Water is subject to further investigations by the Environment Agency which we expect to cover all the misreporting, obstruction and possible fraudulent acts by its senior management and staff.

“This deliberate misreporting by Southern Water exposes a major weakness in the operator self-monitoring system which is reliant on the honesty of the water companies. The fact that this fine follows the record £20 million fine imposed on Thames Water Utilities Limited for polluting the Thames from six treatment works over a number of years means Ofwat has some way to go to achieve its 2018 aim of restoring trust in the water sector [see notes]”

She added: “This comes at a time when cuts to the Environment Agency are causing gross under-funding in their own monitoring. The result is that water companies who pollute our rivers and water bodies have a good chance of never being caught.”

These incidents emphasises the importance of Fish Legal’s environmental information case which changed the law in 2015 so that water companies in England and Wales are now obliged to disclose details about pollutions on request to anglers and the wider public [see notes]. The case, which the water companies fought all the way to the European Court of Justice, gives individuals the legal right to find out directly from these privatised companies what damage is being done to the water environment.

“There needs to be a reform of the system of monitoring and regulation of the water companies. The Environment Agency must take the lead in overhauling the current failed system to provide more continuous and transparent monitoring of our rivers and the discharges from sewage treatment works as a check on the self-reporting regime. Water companies cannot be trusted to self-report and self-regulate.

"Furthermore, we believe that ministerial pressure must be bought to bear on Ofwat to ensure it gives equal weight to the impact the water companies have on the environment, alongside the value for money they provide to customers.”

Ofwat is consulting on its proposal to impose a penalty on Southern Water. The Angling Trust will be working with other similarly concerned groups on a joint response by the deadline of 19th July