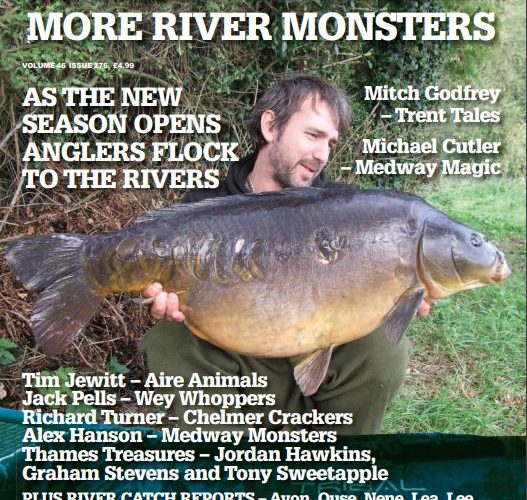 From the editor of Big Carp, here’s a look at the latest issue… 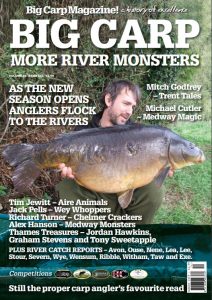 River carping encapsulates many of the attributes of old school carping. It still adheres to the old close season, ending as it does on the 14th of March and reopening on the ‘glorious 16th‘ of June each year. But more importantly to many, river carping offers the angler the element of the unknown, even though, as time goes by, more and more is known of our river stock, and for certain there are monsters swimming in the depths yet to be caught by our enthusiastic river carpers.

As we know, virtually all river carp are escapees from lakes in flood or lakes that have been joined to the river system to form marinas. Nick Helleur’s Thames record of last year is almost certainly of the Dinton strain, but how many more escaped that year during the flow? In fact there could be some huge surprises still to be uncovered. There was always talk of the Sonning Eye somehow ending up in the Thames, and what of Savay’s most famous carp, Sally, and her mates ending up in the Colne the year of the flood? We already know of one or two being caught from the adjoining canal. The fact is, we really don’t know where these fish are, and when I say these fish, I mean carp throughout the land that have somehow found a new home in a nearby river.

So this month, following on from our highly successful Thames Carping issue, we look at captures from all our rivers. For starters, a handful of new Thames articles from Tony Sweetapple, Jordan Hawkins and Graham Stevens, some awesome creatures amongst them. And quickly, whilst on the subject of the Thames, look out for our new Thames Carping book out later this year. We are currently looking for chapters, so please get in touch if you would like to be part of it.

Here’s what we have this month… Firstly, some carp of epic proportions, Jurassic escapees and uncaught leviathans from a nature reserve adjoining the River Aire. If it’s big forties and even fifties you want, look no further than this piece by Tim Jewitt and friends. Mitch Godfrey returns with a year on the Trent. Phil Newman tackles the Severn while Ollie Seaborn uncovers the secrets of the River Wye. We have two pieces on the River Medway: one from Michael Cutler and a second from Alex Hanson. Jack Pells tackles the River Wey with some incredible results. Add to these catches from the Wandle, Avon, Ouse, Nene, Lea, Lee, Stour, Wensom, Ribble, Witham, Taw and Exe, and this month’s issue is a must read for river and non-river anglers alike. If you, like me, have a passion for off the beaten track carping then this is the issue for you.

Also this month, we have river catch reports, competitions, carpy news and reviews; in fact everything you need to get you fired up and down to your local river in search of the unknown. Next month, we have an Old School Tribute to the late Roger Smith who sadly passed away this month – an issue every carper will want to own. Why not save money and get a subscription here – www.bigcarpmagazine.co.uk? See details on pages 50 and 51.

See you next month,