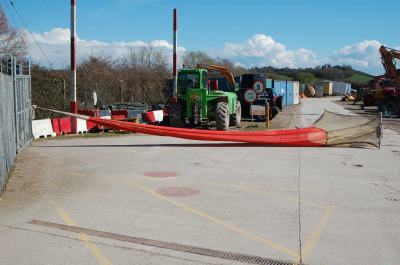 A Bridgwater fisherman has been prosecuted for using an illegal net, having no licence and threatening Environment Agency staff with a scaffolding pole.

The case was brought by the Environment Agency.

John Gillard, of 17 Kings Drive, Westonzoyland, Bridgwater, was fined Â£1,800 ordered to pay costs of Â£600 by Bridgwater Magistrates and his net was forfeited.

The court heard that on the 1 April 2007 Gillard set a fixed net on the tidal River Parrett, near the Blake Industrial Estate, Bridgwater. When he was approached by water bailiffs he became aggressive and threatened to hit them with a metal pole.

Gillard had been seen by witnesses using a fixed net with the floats clearly visible. This method of fishing gives the fisherman an unfair advantage and allows him to catch substantially more than his law abiding colleagues.

When Gillard was told his catch was illegal and would have to be returned to the river and his net seized he immediately became aggressive, swearing and threatening the officers with a scaffolding pole.

The two Environment Agency staff drew their batons and told him to drop the weapon. He then threw the metal pole into the water and got into a white van and drove off.

â€˜We take cases of abusive behaviour against our staff very seriously. It is unacceptable and we will not hesitate to prosecute anyone who behaves in this way. This was the worst case of violence that I have ever had to face and I feared for the safety of my colleague and myself,’ said Richard Dearnley, for the Environment Agency.

â€˜He also had no licence and his net was fixed to the river bank. This can cause serious ecological and environmental problems by preventing fish from completing their migration.’

The Environment Agency also prosecuted Raymond Sellick for fishing for elvers on the River Parrett by the Thatchers Public House, near Moorland, Bridgwater, with an illegal net.

Sellick, of 22 New Road, Bawdrip, Bridgwater, was spotted by a routine Environment Agency patrol fishing for elvers with a huge illegal flow net, which had been fixed by the aid of poles and ropes.

The net should be no bigger than 1.25 long and the rest of the measurements should be no longer than a metre. The seized net owned by Sellick measured 2.9 metres by 10 metres.

This method of fishing with a fixed flow net and an oversized elver net not only enables the fisherman to catch large amounts of elvers but also deprives law abiding fisherman of their catch.

Sellick was fined Â£1,000 for fishing for elvers without a licence, using an oversized net and a fixed flow net, contrary to the Salmon and Freshwater Fisheries Act 1975, and the National Eel Fishing Byelaws 2004. He was also ordered to pay Â£590 towards the costs.