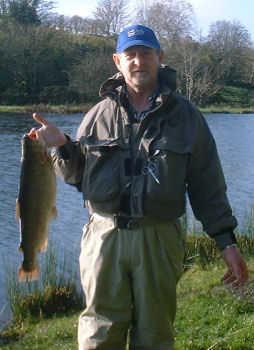 Although the weather had taken a turn for the worst this weekend now that we are beginning the winter season, anglers were still keen on trying to catch one or two of the great fighting trout at Cashel.

Magilligan’s Willie Mc Elhinney and son Liam put in a very wet day to land seven and three trout respectively using the hare’s ear nymph.  Mark Boyce from Dungiven released four back into the lake while his neighbour Chris Dougan had a challenging time with the help of Mark to bank a real beauty weighing over 12lb.  Chris was using his wee 8ft rod and was fishing a wee klinkhammer when the big boy struck.  Derry’s Aidy Askin released five trout which fell to pheasant tail buzzers while County Louth anglers, John Duffy and Gerard Martin used GH hare’s ears and fritz flies to bank five between them weighing an average of 2lb.  Damien Donnelly (Draperstown) did very well also bagging two for home, one of which weighed 7lb with the other weighing 2lb 6ozs.  His trout fell to a silver head rainbow coloured lure.  Bellaghy’s Brian Canavan also put in a very wet day releasing six trout which all took assorted lures.

Well done to all!

We now stock a splendid variety of fly and spinning tackle at Cashel Fishing Lodge.

We are now taking group bookings for any angling club or corporate groups interested in a fun day.  Catering facilities are available in the adjacent Cashel Fishing Lodge.