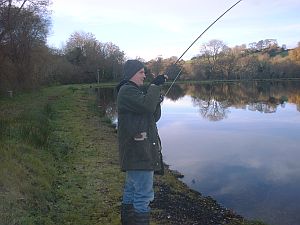 This beautiful spring weather has encouraged anglers once again to put their fly fishing skills to the test with us here at Cashel.

Well done to all!

River Licences are on sale at Cashel Trout Fishery.

We are now taking group bookings for any angling club or corporate groups interested in a fun day.  Catering facilities are available in the adjacent Cashel Fishing Lodge.