Arriving four days earlier gave the England Junior team three days of practice on the match venues. During the practice days tactics were decided and tackle was refined and plans were made, with the fourth day spent entirely on rig making, and replacing main lines and leaders ready for the Championship.

Day 1 – The first official match day was fished at Terracina in fairly calm conditions with a storm forecast at the end of the match. For safety reasons the match was finished just over an hour earlier than expected due to a lightning storm. Results were France 1st, Italy 2nd, England 3rd and Portugal 4th.

Day 2 – was fished at Latina Lido with the storm the night before having kicked up a strong surf and left the sea quite coloured which ruled out some species that Team England caught in good numbers at this same venue on practice, but they were comfortable with their plan and fished hard catching fish. Results were in with France 1st, England 2nd, Italy 3rd and Ireland 4th. Overall positions were now showing England in silver medal position just behind France in Gold.

Day 3 – Porto Badino was the venue with the conditions having calmed down after the storm with the colour dropping giving England the same conditions as practice days. With a confident push at the start of the match England were soon up and running. Results were in with Italy 1st, England 2nd, France 3rd and Ireland 4th. Overall positions showed France in the lead, Italy runners up and England in bronze place.

Day 4 – Fishing at Porto Badino again but a different section of the beach to day three with the times of fishing much earlier in the day. Going into the last day England had to build a 7-point cushion between them and fourth place Ireland, so England knew if Ireland won the last day as long as England didn’t come last, they were guaranteed to a podium spot of bronze. England pushed hard and by around the mid-way point they were winning the day and had Italy fishing a hard-fought match. Using all their local knowledge Italy slowly fought their way back to top spot winning the day with England 2nd, France 3rd and Portugal 4th. 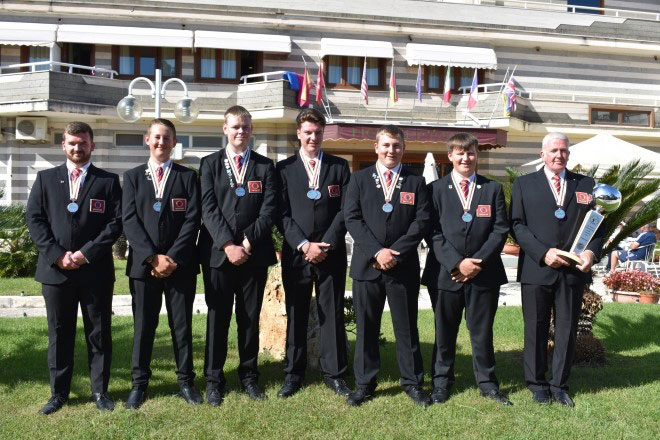 When the results came in Team England had managed to finish in a superb bronze medal position, just behind France in silver, with Italy taking the lead and overall World Championship title. Another fantastic result in the individual category this time saw England’s new cap James Slater take the silver medal to book his podium finish. Just missing out on the podium medals was Riley Price, England who finished in a credible 4th place individually.

David Graham, England Junior Manager said “In many other years four-day scores of 3rd, 2nd, 2nd and 2nd would have been enough to win the Championship, but this highlights how extremely hard fought and how consistent the top three teams were in this year’s Championship. A massive achievement by all of the team members, Riley Price who finished a fantastic 4th individually, a strong and thoroughly dependable performance yet again by Tom Ryder and Adam Molloy who form the backbone of the team, but a special mention goes to the two new caps James Slater and Curtis Driver who had not experienced competition fishing at this level before and worked so hard and achieved so much for the team. James especially as he finished in an incredible silver individual placing. Last but not least assistant manager Callum Graham who we all owe a debt of gratitude as he ran all the tactics on the beach from the first cast in practice to the last cast of the Championship, without his depth of knowledge and ability we would not have finished on the podium.”

“A massive thank you to Mark Preston and Mark Slater who spent 4 days driving the team’s fishing tackle out to Italy and home again, plus all the matches and practice in between who are as much a part of the team as the anglers. A huge thank you to the following for financial support, fundraising support, tackle support and help and advice along the way to: The Royal Society of St George, Tom Bagnall and all the team at Christchurch Angling Centre, Tronixpro, Shore cast leads, Asso, Moonglow, Tackle 914 and John Parker, Bournemouth Fishing Lodge, Castaways Tackle, Wessex Tackle, Wessex Junior Flounder League and Southern Sea Angling Leagues and Opens. Thank you and appreciation to all the fellow anglers, friends and family who sponsored, donated, raffled and helped the team achieve this fantastic result, without you none of this would have been possible.”

The Angling Trust and Team England would like to thank the Italian Federation for running a faultless Championship. The Angling Trust would also like to offer their congratulations to the team on such a fantastic achievement this year on winning team bronze and to James Slater for his 2nd place individual win.