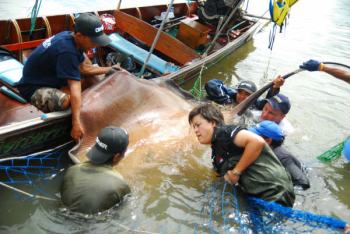 Giant Freshwater Stingray research in Thailand is progressing well with the Fishsiam Ltd team now having accounted for the capture of 96 individual Giant Freshwater stingrays.

All fish caught are now examined by the Chulalongkorn University Research team in Bangkok under the supervision of Dr.Nantaika Chansue, who is the world’s leading veterinary authority on the species. The expert veterinary science team under the direction Dr.Chansue has been engaged in groundbreaking research of Giant Freshwater Stingray and has been working alongside National Geographic explorer, Dr.Zeb Hogan, on various scientific studies concerning the species.

Dr.Hogan and the research team have successfully surgically implanted acoustic tags in numerous Giant freshwater stingray and deployed receivers at strategic locations along the Maeklong River, which are now being used to monitor the fish’s movements. Additionally, numeric external tags have been placed on fish to assist in identification in the event of any recaptures.

The scientists have been collecting all relevant data from captures made by the Fishsiam team, with all fish being measured accurately recording widths and lengths for future assessment of Giant Freshwater stingray growth rates.

Other groundbreaking studies carried out by the scientists have included the collection of the poisonous mucus from the barb of the Giant freshwater Stingray for use in toxicology testing. Initial toxicology tests have shown the venom to share characteristics with that of a Pit Viper, with the poison inflicting a fast acting necrosis and extreme pain to victims. The Chulalongkorn University research team has been working alongside members of the Red Cross in an effort to produce a vaccine to combat the effects of the toxins/mucus found on the barb of Giant freshwater stingrays.

The scientists have also been collecting blood samples from all fish caught for genetic comparison with specimens that the team has caught from the Ban Pakong River in Chachoengsao in addition to fish caught from other rivers and in aquariums throughout Thailand.
Comparison of blood samples taken from fish held in captivity with wild Giant freshwater stingray caught by the Fishsiam team have revealed a vast difference with a massive difference in health levels. Wild fish, even directly after capture, have displayed much greater levels of vitality and health when compared to stingrays held in captive environments/aquariums.

Blood samples obtained by the scientists from pregnant females have shown an ability to clot almost instantly on extraction. It has been suggested that this  clotting ability may be a natural defensive mechanism designed to not attract predators at birthing times with large amounts of diluted blood.

The collection of parasites found internally on the gill covers of Giant freshwater stingray has also been conducted for further scientific research and comparison with other specimens caught by the team in addition to other species of stingrays such as the Amazonian Giant Freshwater stingray.

Recent expeditions to the Maeklong River in Samut Songkran Province have seen several large females captured which have been found to be pregnant indicating a healthy and breeding population is present in this particular river system.

A closer inspection with Ultrasound equipment found the large female to have at least two other newborns waiting to be born. Due to the condition of the fish, the large Stingray and its infants were released promptly after scientific data and measurements were recorded.

Another capture on the 27/05/09 saw another client catching a very big Giant freshwater stingray of well in the excess of 200kg’s (2.1m). On this occasion, the large female gave birth to a live newborn stingray with a width of 36cm’s which was identified to be a small male. The fish on this occasion was clearly holding more babies and was quickly released after basic dimensions and scientific data were recorded for further scientific investigation.

Conservation minded anglers will be given the unique opportunity to fish alongside Dr.Zeb Hogan during field trips to various locations in search of Giant freshwater stingray.

Megafishes project Director Dr.Zeb Hogan will be working alongside Associate Professor Dr.Nantaika Chansue with her expert team of aquatic veterinary scientists from Chulalongkorn University in Bangkok in an attempt to mount the world’s first comprehensive study of the awesome Himantura Chaophraya/Giant freshwater stingray.

The forthcoming research expeditions which have official approval from the Department of Fisheries in Thailand will see conservation minded anglers fishing at various locations throughout Thailand in search of the mythical Giant freshwater stingray.

Anglers will be pushed to their absolute physical limits in pursuit of what has been described as possibly the largest freshwater fish in the world whilst also contributing to the ongoing research of this highly enigmatic prehistoric predatory fish species.

Conservation minded anglers attending these trips will be assisting in the funding of Giant freshwater stingray research with a $100 USD donation being contributed towards the continued conservation and research of Megafish in Thailand from each expedition.