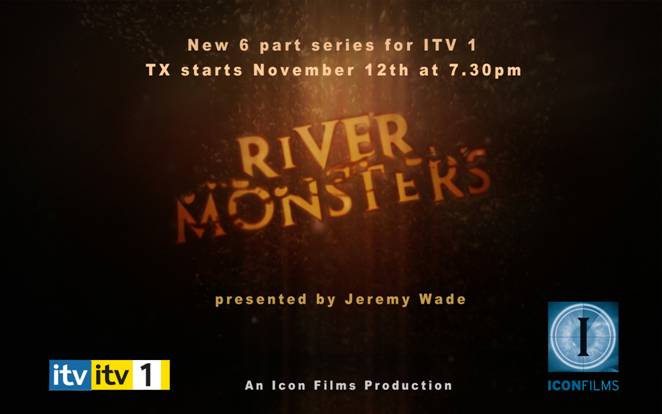 This gripping series follows biologist and extreme angler Jeremy Wade travelling the world to find out the truth behind stories of freshwater fish that have developed a taste for human flesh. People have disappeared, people have been injured and people have been killed. Jeremy risks his life on expeditions to some of the planet’s most inhospitable locations to track down eyewitnesses, survivors and victims of attacks. He hears of deadly Piranha feeding frenzies, fish that have swallowed people whole, mysterious sightings and vast fresh water horrors and heads out to hunt for these River Monsters for himself.

12th November, 2009
Piranha
In 1976 a packed coach crashed into the Amazon killing 39 people. Some had been so badly mutilated by piranhas that they could only be identified by their clothes. Is this proof that Piranhas do live up to their evil reputation? Jeremy Wade will go to extraordinary lengths in his mission to find out. By swimming with Piranhas, inciting them into a feeding frenzy and tracking down survivors and eye witnesses of Piranha attacks, we discover if the Piranha is truly the river monster of the deep that fills our nightmares.

19th November, 2009
Killer Catfish (Piraiba)
A man swallowed whole by a giant fish. Another penetrated by a fish in a most unnatural fashion. Could just one diverse family from the dark underworld of the Amazon be responsible? Jeremy Wade is on the hunt for these notorious killers to determine if their crimes are real and their methods as gruesome as reported. Only in the depths of the Amazon could such nightmares of nature exist. And Jeremy will face them all as he tracks down the Killer Catfish.

3rd December, 2009
European Maneater (Wels Catfish)
A report of an attack on a swimmer in a lake close to Berlin is the starting point for an intense and shocking investigation. Surely fish don’t attack people in European rivers? Biologist and extreme angler Jeremy Wade travels to Germany where he meets modern day victims of a beast that has been on the prowl in these waters for the past 700 years. His investigations take him to Spain where he discovers first hand that as a consequence of a science experiment gone wrong, the Wels Catfish is growing to man eating proportions capable of everything depicted in medieval records and more.

10th December, 2009
Alligator Gar
In the Bible belt of the South is a river monster with the reputation of a devil. Blamed for a series of violent attacks on humans, this creature is said to be as vicious as a shark and as big as a ‘gator. The authorities said it should be annihilated. But not all are so quick to condemn it. Extreme angler Jeremy Wade heads to Texas on its trail in an attempt to uncover the facts behind this animal’s notoriety. Helped by local expertise and with his own wits honed sharp, he finds new ways to reveal the truth about the monster Alligator Gar.

17th December, 2009
Amazon Assassins (Arapaima)
The Amazon River is host to a terrifying collection of man-eating monsters. But in the darkest depths lurks a dinosaur. Legends tell of an evil spirit inhabiting an enormous fish. Taller than a man, it is covered in scales and crushes its prey with a tongue made of bone. But with a body of pure muscle, its primary weapon is power. Jeremy Wade, biologist and extreme angler has encountered this creature once before, and he came out second best. This time he’s taking no chances as he investigates every aspect of this vast creature to ensure that in the rematch there will be only one winner.

31st December, 2009
Freshwater Shark (Bull Shark)
No fish inspires the same terror as the shark – a creature with a reputation for having an insatiable hunger for brutal violence. But at least these killers are confined to the oceans. Or are they?

The unforeseen death of a young man, together with a bloody attack upon a racehorse, reveals a dark, unsettling truth. There is one shark which seems to be operating where people thought no danger existed – in freshwater.

Extreme angler, Jeremy Wade’s mission is to find out, if these reports are true, whether it’s safe to go back in the water…even if you’re miles from the sea.

Based in Bristol, over the last 19 years the company has produced over 100 hours of high-end documentary for the UK and International markets.

Icon Films specialises in bringing together commissioners and works with broadcasters including the BBC, Channel 4, Five, National Geographic, Animal Planet, Discovery and WNET and distributors Granada International, BBC Worldwide and RDF International. Icon’s latest series for Animal Planet US, River Monsters, presented by angling explorer Jeremy Wade, became the best performing in the network’s history and has been re-commissioned for a second series.

Recent productions include River Monsters, Tiger Kill, All About Dung, The Mountains of the Monsoon, Street Monkeys, Holy Cow and The Barefoot Anthropologist.Icon Films’ documentaries have won Emmy, Grierson and Chris Awards together with numerous prizes and nominations at film festivals from BANFF to Jackson Hole to Wildscreen. Productions to have won awards include Paranormal Pigeons, Nick Baker’s Weird Creatures, Indian Journeys, Mountains of the Monsoon, Bhutan, The Last Shangri-La and The King Cobra and I.

While Icon has a reputation for originality and excellence in natural history, with an established niche-expertise in the Indian subcontinent, the company also works in many other world-wide locations and across various genres – history, science, travel, anthropology and religion.