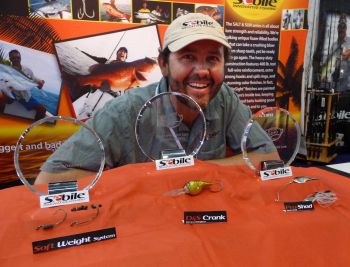 New products entered into the annual competition are judged by outdoor press members, wholesale and retail tackle buyers. Awards are based on innovation, usability, design, quality, practicality and value for the money.

This year, 248 vendors exhibited their products at EFTTEX. SEBILE faced stiff competition from many of the largest tackle companies in the world.

SEBILE is no stranger to the winner’s circle however. In 2009 in Orlando, Florida at the American Sportfishing Association’s International Convention of Allied Sportfishing Trades (ICAST), SEBILE won Best Hard Bait for its Spin Shad and Best Soft Bait for its Magic Swimmer Soft. It was the first time in ICAST’s 41 year history that a company won both hard and soft lure categories.

Based on its three year winning streak, SEBILE certainly continues to be the most innovative lure company in the world in 2010 and beyond.

“At SEBILE, we position ourselves at the very sharpest leading edge of the fishing tackle evolution in the world today, always there and nowhere else,” says company founder, CEO and lure designer, Patrick Sebile.

At ICAST in Las Vegas, Nevada on July 16-18, 2010, SEBILE will enter another innovative lure design into competition – the A.T. Worm. “This is not just one more worm. It works on all terrain (why it’s called A.T.) and under all conditions. It has unique new features and benefits for anglers,” says Patrick Sebile.

About SEBILE Innovative Fishing
SEBILE is not a typical company that produces common styles and currently popular tackle as copy makers in the industry do; but SEBILE researches, tests and offers anglers unique products that are one-of-a-kind and that truly “speak” to the fish more than to the angler, and that is a big part of the success that SEBILE baits have had in the short time the company has been in business.

Patrick has landed over 600 species of fish in fresh and salt water in 63 countries. He has developed the company’s entire product line of sportfishing tackle based on his vast experience, including designing fishing products for over twenty years for other major tackle companies prior to founding his own company in 2006.