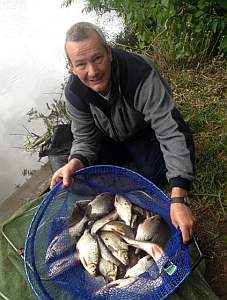 Welsh international Andrew Murphy took the honours in the second Shakespeare Championship qualifying match of the year, with a 20lb 2oz net of silver bream from the newly created peg 87. Andrew, or ‘spud’ as he is affectionately known to many, caught his fish on the waggler –  feeding sparsely with bronze maggots and fishing a single bronze maggot on the hook. He ended the match with around 25 silver bream, and a good perch to take victory with over 1lb to spare.

Stoke Hansford AC’s James Pitman took second spot, thanks to a three bream haul from peg two on the Town Water. James fished groundbait feeder with maggots, casting half way across the river, taking his fish on double bronze maggot.

The fancied peg 35, on the Avon’s confluence with the River Isbourne produced the third placed weight, with Sensas W.B. Clarke’s Pete Morris catching a fine net of chublets on waggler and long pole tactics. Pete loosefed bronze maggots around halfway across the river, catching well on running line in the early part of the match. Later, he switched to a chopped worm line that he had fed on the pole at 13 metres to end the day with a 16-9-0 net.