Help Us Search For A Signal 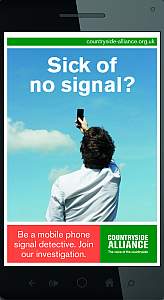 Home » Help Us Search For A Signal

The Countryside Alliance is asking people in rural areas to become phone detectives this summer and help us map real phone reception rates across the UK.

We all pay the same to run our mobile phones, regardless of where we live. But rural businesses and individuals tell the Countryside Alliance they have a far poorer service.

Now we are searching for evidence to ensure people living in the countryside are not forgotten by mobile phone companies and that they benefit from the Government’s £150m mobile phone infrastructure project.

Students at Harper Adams University in Newport, Shropshire, have no mobile phone service on campus – unless they are on Orange.

Those with other service providers may as well turn their phones off as they are in a completely dead zone, said Merek Hammond of the college.

“We have to warn the new students. I think you’d be pretty peeved  if you signed up to a year’s contract before starting at Harper Adams and then realised you had no signal,” said Merek.

“We have a good Orange signal and you can just about get a Vodaphone signal in some places on campus but other than that, forget it.”

Alison Hawes and her husband John Walters-Symons supply organic vegetables and lamb from Borough Farm in Holbeton, near Plymouth, but have virtually no mobile phone signal, which Alison says is difficult for their business.

“Like all farmers, John’s out on a tractor all day and he needs to be in contact with the companies we supply, like Riverford. But there are only a few places on the farm where we have signal. It’s very frustrating,” she said.

Countryside Alliance executive chairman Barney White-Spunner, said: “The rates of phone coverage quoted by phone companies are a best case scenario. We all know how much phone reception can vary in the countryside and we feel households and businesses based there at a disadvantage.”

The Countryside Alliance is asking people to download the free RootMetrics app onto their smartphone or tablet and use it while they are at home as well as while they are out and about.

The app tests the strength of their signal and automatically records the result. You can also use it to check which company provides the best service in your area.

The information will be used to lobby phone companies and the government to improve rural reception.

For further information on how to use the app and to see results so far, visit www.rootmetrics.com/uk/