EDITOR’S NOTE: This article is written by a succesful Holyhead skipper, Gethyn Owen, but the principles apply to smoothound fishing in many locations throughout the UK. If you ever fancy a fishing trip to North Wales, check out http://www.goangling.co.uk/ 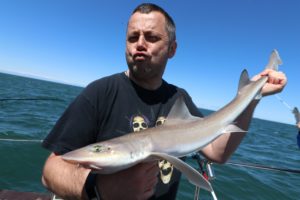 North Wales has long been associated with some very good catches of smoothound. The fish have been targeted by both boat and shore anglers with some superb results. Hounds can be found around many boat marks off Holyhead, Trearddur Bay, Llanddwyn and Whitebeach. All these marks have given anglers some quality specimen fish over many years the very same areas also offering shore anglers the opportunity to hook into this hard fighting species. Fishing for smoothies in waters relatively shallow at only 45’ can be a very exhilarating experience. 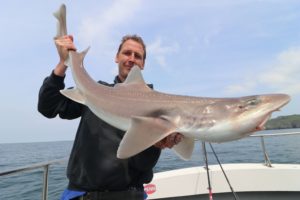 Identification
Smoothhound have a grey upper body and white underside. The starry smoothound (Mustelus asterias) takes it name from the many white spots that are found on the upper part of its body, while the common smoothhound, Mustelus mustelus, has none. The starry smoothhound is ovoviviparous (method of animal reproduction in which fertilized eggs develop within the female and the embryo gains no nutritional substances from the female) with a gestation period of up to 12 months.

A hound has two dorsal fins, two large pectoral fins and a long snout. In its mouth it has a set of large crushing jaws rather than teeth, far more beneficial given its diet.

I’m sure many reading this will have caught a fair number of smoothhound, both starry and common, though have they really hooked a common hound? PhD researcher Ed Farrell, Dublin University, has been conducting a range of studies into the distribution of common smoothhound throughout Ireland and the UK. There is a common smoothhound species that can be found in the Mediterranean and South African seas, Ed however is almost certainly convinced that the common hound species Mustelus mustelus, does not make it into UK waters. No evidence of a common hound was found, his findings concluding in both the Irish and Welsh angling governing bodies listing only the starry hound on their record list.

Smoothhound are found in mainly shallow waters around our coastline feeding on a host of crustaceans that include hermit, shore and edible crabs. In Holyhead, when crab has been hard to come by, we have also had fairly good catches when fishing for smoothhound using large squid baits tipped with 3 or 4 good sized ragworm. 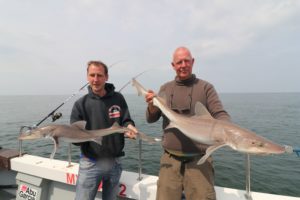 Smoothhound are generally a shallow water shark and are rarely found in waters deeper than 200ft. They tend to favour sand or mixed ground, the younger hounds feeding on prawns and small crustaceans with the larger specimens favouring a range of different crustaceans.
Shore crabs are most effective when peeling or as a soft back. A peeler crab is simply a crab that is shedding its current outer protection, the shell, to grow larger. Underneath the current hard shell you will find a new softer and bigger shell. Such crabs are found sheltering in soft sand, or mud flats etc under rocks or other pieces of debris that offer them protection from predators. With its shell soft, the crab is prone to attack from smoothies and other fish wanting to feast on this delicacy. Peeling crabs ooze a very pungent orangy/yellow liquid, which the smell of drives many a fish such as smoothhound, cod and bass into a feeding frenzy.

Baiting Up
When using a peeler, many anglers choose to peel the outer shell and remove the crab’s gills, in preparation to wrap this particular bait into a neat little parcel for the hook. If choosing this method, don’t wrap the bait too much. Often you see crab baits aboard My Way that would look better in an Egyptian Mummy’s museum and not trotting along a sea bed. Care when hooking the bait, and a few gentle twists of cotton, will allow the juices to seep from the bait unhindered.

However, is the trouble of peeling and wrapping in cotton actually required, after all the smoothhound is not used to this level of food preparation before it munches down on its prey? The smoothhound is a member of the shark family, who, as most of us are aware have a very sensitive level of smell, and are reputed to detect scent from a food source from a fair few miles away. My preferred method is to simply hook one or two crabs once through the back, and, hey presto, job done. In doing this you are presenting to the smoothhound a more realistic looking food, yet still releasing the scent from the crab. This method also safeguards against the smell being washed out of the crab too quickly. Furthermore, there are always other fish in an area where smoothies are being targeted. These fish also after a feed, such as dogs, small codling, whiting etc, are all drawn to abundant smell of the peeler, so another saving grace of using the simple method is that it can reduce the number of hook ups from unwanted pests at the time of your smoothhound fishing.

When To Fish
Hounds first move in during early May, and hang around until early July. These fish often hit well into double figures with some specimens taken just shy of the 20lb mark. Off Holyhead, we have also noted a return of the fish for a month from late August into mid-September, with these fish averaging around 8lb. 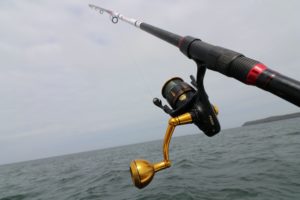 Owing to the shallow depths of water usually associated with smoothhound fishing around the North Wales coast, targeting this species benefits most from uptiding; launching the bait out of the scare area around the boat, and anchoring it hard to the sea bed. There is no real need to trot bait around the sea bed when fishing for smoothies, as they are pack fish and tend to swim in feeding shoals that will hunt down your bait with ease.

A good uptider or general purpose rod will happily cope with the rigours of playing a fast and hard fighting smoothhound. For the majority of our hire rods, we have a variety of boat rods available Shakespeare Agility 2 braid boat 12/20lb, Greys GR100S 20lb or the Shakespeare Ugly Stix G2 12/20lb.

But for our hound fishing, we like to scale down the gear slightly. Shakespeare Agility Tipster rods or the PENN Squadron II Touch Tip rods offer a light and exhilarating experience when fishing for hounds. For the slightly more experienced, we downsize even further; PENN Rampage II Bass Spin 15-55grm rods are the ultimate thrill when landing a 20lb smoothhound!

When choosing your main line, you should be looking for something in the region of 20–25lb breaking strains. The choice between braid and mono has to be down to the individual and their preferred reel line. However, if choosing braid, a 40 or 50lb shock leader will help absorb any impact if the fish makes an impromptu bid for freedom, plus safe guard against potential scuffs when fishing the rocky grounds. . 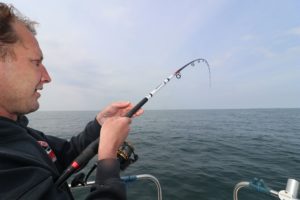 There are not too many variations of rigs when fishing for smoothhound. A simple running ledger of either 1 or 2 hooks will suffice. Your trace line should be between 30 and 50lb breaking strain, with hook sizes between 1/0 and 4/0.

When targeting the much larger smoothhounds, sometimes it is wise to upgrade your hooks to 5/0, thus allowing you to fish bigger baits, such as whole large velvet or swimmer crabs. Naturally, you may find that hook-ups will be reduced, but as with most forms of sea angling, with perseverance you could be rewarded with a fish in excess of 20lb.

In closing, though, it is important to point out that the majority of double figure smoothhounds, and especially those caught in May and June are pup bearing females. These fish should be released quickly at the side of the boat wherever possible. However, if a weight and photograph is wanted by you or your mate, by all means do so, but take care to be as quick as possible, returning the fish to the water without too much stress. 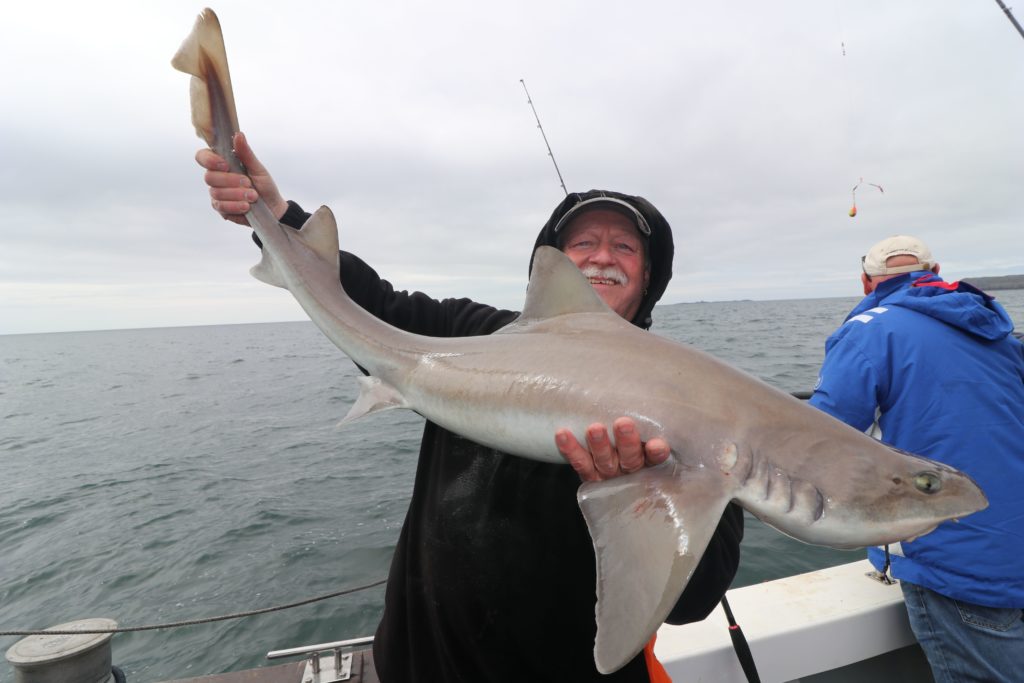 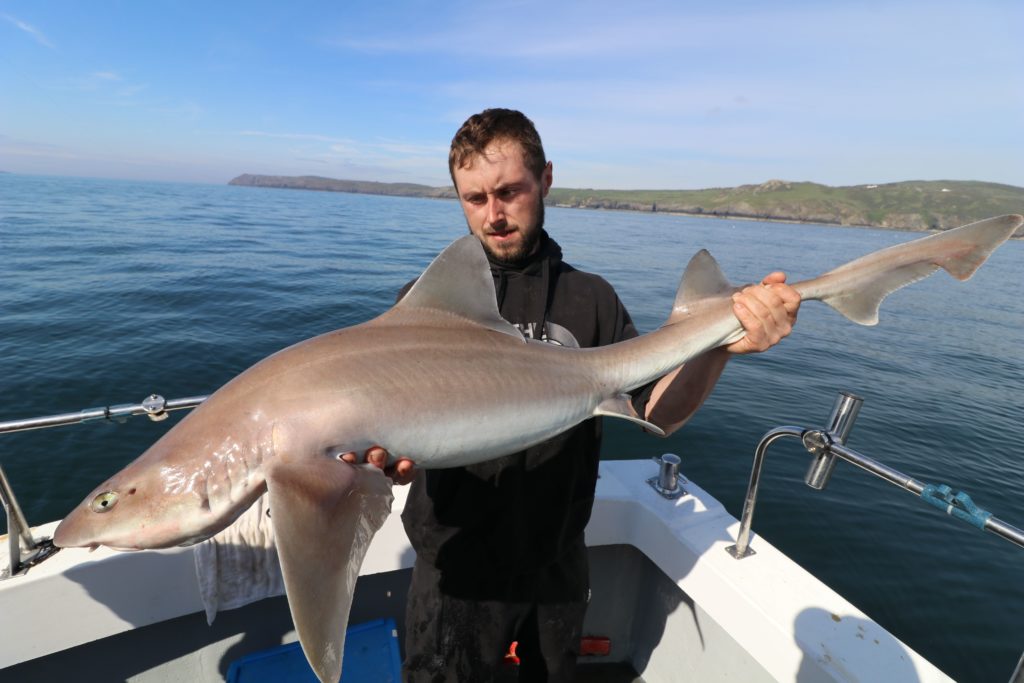 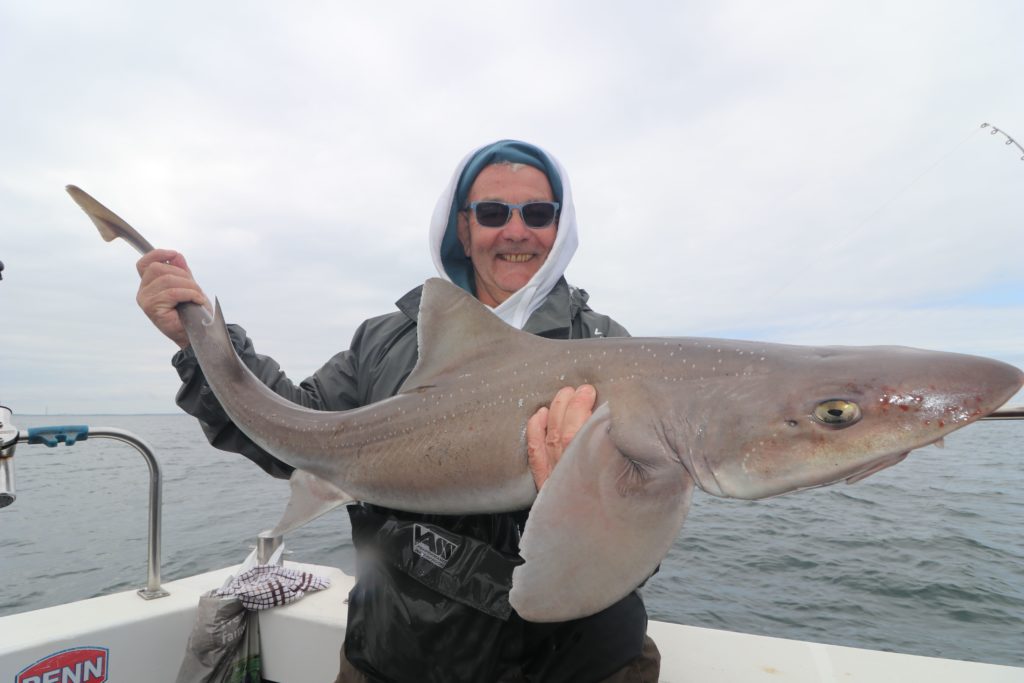 Owner/Skipper of My Way 2, Holyhead-born Gethyn Owen is a charter skipper with extensive local knowledge and a wealth of boat angling experience.