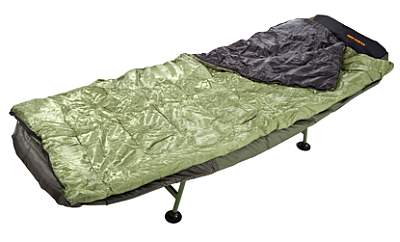 Perfect for those occasional nights on the bank

We’ll be honest; if you’re a session angler, one who spends many nights on the bank each year in pursuit of fish, a bedchair and sleeping bag is something you’ll want to spend a lot of time choosing. You’ll probably want to spend a fair bit of money on it, too!

However, if you’re an occasional ‘overnighter’, young angler or just on a tight budget, this may well be a deal worth considering…

The Carp Kinetics bedchair and sleeping bag usually sells at just £50, which is a good deal, eanyway. However, in the Dragon Carp Direct January Sale, they’re flogging them at just £30 + P&P. It’s worth remembering, too, that they do ship worldwide…although we have no idea how much a package that size would cost to ship to Mongolia!

We haven’t seen this product in the flesh, so would advise you to take a good look at the description and photographs on the Dragon Carp website. Here’s one bit of the description:

“The robust tubular metal frame folds out to reveal the full length bed that will cater for the tallest of anglers, the waterproof hard-wearing olive green padded nylon material offering lots of comfort combined with the padded black head section. Stability comes from the two sets of fold out legs finished off with swivelling mudfeet and locked in place by a simple but clever orange pull out button that’s easy to locate and operate even with the coldest of fingers.”

We reckon this has got to be a fantastic deal for someone looking for a cheap bedchair and probably the cheapest bedchair and sleeping bag in the UK. It’s just one of the deals in their January Sale, which is going to be very popular, so CLICK HERE to see if there are any left.