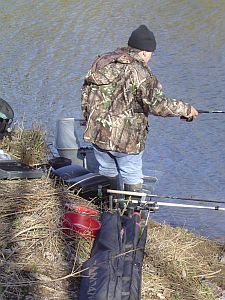 A Christmas story by Ted Lamb

The traditional  annual fur and feather match was the highlight of the year, always held in good spirits and with a full turnout of all the regular match-anglers.

It was said there was always a prize for everyone, and it might well have been so looking at the groaning prize table some of the wives were busily setting out at the edge of the car park – everything from a bottle of beer to wine, table birds, and the highlight of it all, a Christmas hamper containing a turkey, pudding, ham, mince pies and a host of goodies that would be a delight for anyone’s festive table. Andy Embling thought he would like to win that, and he wasn’t alone.

His fellow contestants were starting to gather round the club secretary to draw peg numbers from a battered  felt hat, with a deal of good-tempered banter as the paper slips were opened to reveal which part of the river each person would have to tackle. As he took this scene in Andy tucked his hands under his armpits and realised it was not going to be an easy day, at least so far as the fishing was concerned – it was bright and bitter. Bright was all right had it been warmer, and cold might have been all right had it been dull. But today’s conditions were absolutely the worst for this bit of water…unless you were lucky to draw the bream hole on the bend by the willows, peg 23.  Anyone who landed there could well be the winner. He was just about to go over and draw his own peg when he noticed the old man at the other end of the prize table staring at the hamper.

Andy nudged Ivy Peterson, who was plonking a large bottle of sherry on the table, and asked: “Who’s the old boy?”, nodding towards the veteran – he’d seen the chap before, and in fact he turned out for most of the club matches.

“Old Jack Turner you mean? Got a bit of a problem Jack has – his daughter lost her husband posted out to Afghanistan and now they’ve  come back to live with him – her and three children, all under 8.  She gets a pension, of course, but it’s a  small house and I know  Jack’s own pension doesn’t go far. I hope he does well today.”

“Me too,” said Andy, moving towards the man with the draw tickets.

BIT OF LUCK
He shut his eyes as one always does, separating a ticket with his fingertips and stepping back before unfolding the scrap of paper. He blinked when he saw the scribbled number, hardly able to believe his eyes – peg 23! He’d got the bream hole. What a bit of luck! Somebody nearby muttered a good humoured “jammy blighter”.

When he’d set up his tackle and settled back Andy noticed that old Jack Turner was pegged next to him, in between the willows. Leaning forward he could see him properly  as the starting whistle was sounding, and shouted “Good luck!” earning a smile and a wave.

The water looked promising but it was going to be hard to coax much from it, even if he did have the best peg on the stretch. Maybe a bream, possibly two, but what bream they were in this spot, hardly any of them under 2lb. Along the match stretch, he knew, there would be many blanks in these conditions, many dry nets, and a couple of good bream from his hole could seal the result. There were a few bubbles towards the middle – the deepest part of the hole. He decided to groundbait lightly with a handful of pinkies now and then, with a nice fat, lively amber-coloured maggot for bait. That ought to do it! The slim antenna of his float bobbed upright and settled, a couple of shot keeping it in its place in the slow current. Then it was a matter of waiting…but not for long.  Ten minutes in, the float lifted and swung sideways,  meaning   something had picked up the bait, shifted the  anchoring  shot. He struck, and was  soon drawing a nice bream over his landing net. He felt the heft of is as he lifted the net – all of 3lb.

LAUGHING
He unhooked the fish while it lay in the landing net and  was about  to take it out and put it in his keepnet when he noticed that his near-neighbour, the old boy, was also playing a fish. He could tell it was a decent skimmer from the way it kicked. Well, the old chap might be in the prizes now, thought Andy, but nothing to the fish I’ve just caught. Bringing home the hamper would stop Andy’s family laughing – they were always saying he never caught anything! That’s when a  sudden notion struck him, making him laugh out loud.

It was only a two-hour match, enough for anybody under these conditions. Half way through Andy put up his tackle as prescribed in the match rules and went for a little wander. As he suspected nobody was doing very well – a few small roach, a ruffe here and there. He went back to he peg for a long, long cold hour, casting and recasting and now  and then putting out a scatter of pinkies. He was glad when the final whistle went.

When the weighmaster reached the old boy next door, he heard the recorder say: “A real fish at last…well done,” and he couldn’t help smiling. Soon it was his  turn.

“Well?” said the weighmaster, eyebrows raised, while the recorder got ready to scribble on his score sheet.

“Nothing,” said Andy. “Nothing at all. I had a bream early on but there must be a hole in my net. It got clean away.”

“Pity,” observed the scribe, “In the bream hole too. You missed a good chance.”

He stayed long enough at the prizegiving to join in the clapping while old Jack Turner beamed over his prize hamper.

Andy smiled. Almost two hours in the cold had been a long time fishing  without a bait on his hook, and slipping his catch back unnoticed had been a wrench,  but it had all ended with a great result!

Journalist Ted Lamb trained with Angling Times (1960-69) and is author of The Penguin Book of Fishing and The Bait Book (David and Charles). He was founding editor of Sea Angler in 1972 and is currently editor of a local free weekly in the Forest of Dean after working (and fishing ) for British and Australian newspapers during his long career.  Fishing titles on Amazon Kindle include Brassribs

(the story of a carp), Fishing Magic

– all about angling for Boys and Girls, and One Last Cast

is recounted on on Kindle. Visit  www.ted-lamb-books.co.uk or www.amazon.co.uk