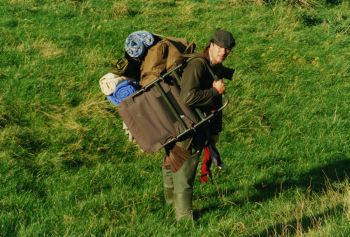 It was my great friend, Michael Loveridge, between deep, agonized gasps of remote Norfolk air who paraphrased ‘Bottom’s’ Edward Hitler – ‘That’s what I like about you, Mr H…you’re totally insane!’

For at least the millionth time, we were staggering through the half-dark of dawn, dwarfed by the mountains of fishing and camping paraphernalia that threatened to crack our spines. Determined to reach that novel,
tempting, little kink in the drain a mile and a half away, we dragged our mud-encrusted wellies past an eternity of perfectly good swims in search of a map reference. We never give up, me and Loveridge.

Best part of an hour later and too knackered to fish immediately, I lay in the long, damp grass staring at the sky through watery eyeballs. A dozen passing lapwings later, the words of the Loveridge resounded in my pounding ears and I had to admit to myself the truth of his tortured comment.

Our stay was to be a long one, so there was no great rush to push out the herrings. Somewhere to my right, my pal had fallen asleep still strapped -in to his mega-sack, so I had all the time in the world to dreamily float back through the manic, heady decades of bottle-top watching and stick-wielding; had I really dedicated – with all the fervour of a nun –more than forty years of my one precious life to the pursuit of water-animals?

Most unwisely, and aware of the folly of too much analysis, I compelled myself to dissect into manageable pieces this all-powerful thing we call ‘angling’. I shouldn’t have. I proved to myself beyond a shadow of a doubt that I – and thousands like me are – without question – completely bananas.

To calculate the time, distance – travelled and the cost involved in a lifetime’s fishing would have been impossible, but I was able to conjure-up some vaguely accurate statistics for just my Fenland escapades….three hundred round-trips (minimum) at approximately 240 miles per trip: 72,000 miles. 4 hours driving per trip: 1,200 hours, or 7 weeks and 1 day sitting behind a steering-wheel.

And that’s just the Fens trips!

How many times, I thought, had I traversed the country from my home-town of Chelmsford to the Wye Valley, the Severn, the Avon, the Dorset Stour, Johnsons Lakes in Kent (Johnsons! I more or less lived there for 10 years!)….the Thames from Teddington to Buscot, the Lea, the Ouse, the Royal Military Canal from Appledore to Hythe….enough venues to fill a Woolworths jotter, each of which I’d fished dozens and dozens and dozens of times!

On each outing, I’d taken, typically, a whole loaf of bread, two pints of maggots, a large bag of groundbait, a pound of cheddar, a kilo of sweetcorn….and chucked the lot in the drink! At £10 per trip that’s….. Oh, my God! What have I been doing? And what for? To temporarily remove animals from their environment! What’s that all about?

Thankfully, Mother Nature blessed us with something we call a soul, a spirit, the ability to think and act upon illogical lines. To survive as a species, I thought, we need only to keep warm, eat, drink and bonk – thank Heaven our intelligent species learned to kick balls, lift ridiculously heavy weights for fun, to throw pointed projectiles at a round board and to pull curved pieces of wire into fishes’ lips.

Clearly, I was unable to dash from my mind the sheer absurdity of what I was doing…what time was it? Where was I? A passing helicopter pilot would see two middle-aged men lying – as if to advertise Little X corsets – in the middle of nowhere at seven o’clock in the morning…in December! Were they dead? Why, he might radio back to HQ with a report of two bodies slumped on the banks of the Old Nene! My mind raced ridiculously as I ‘saw’ the pilot jump from his chopper and race, head down, from beneath the whirring blades…

‘Yeah, fine…we’re just trying to pull some animals out of the river on the end of this thin, nylon string….’

It was Loveridge who rescued me from my dark, perverse thoughts with an irreverent shout for the Kelly to be fired-up. Bless you, Michael. Over steaming mugs of tea, I told him of my nightmarish thoughts, expecting him to understand and to sympathise, but the Loveridge patted my shoulder in mock concern and urged me to get it off my chest, to put my thoughts into words, to write and to purge these unnatural feelings.