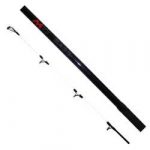 Another top of the range rod from Mike Thrussell. Lovely to hold and cast, great bite indication, soft tip for casting soft baits but loads of power when needed, that just about sums this rod up, do I need to say any more about it? OK, I suppose you want to know a bit about
Read More
Sakuma have brought out several new ranges of their super sharp, super strong hooks for sea anglers. They have a hook to suit almost everyone. They have a new Mini Manta which as its name implies is a smaller version of the popular Manta. This hook will cover everything from mullet to bream and triggerfish,
Read More 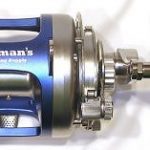 I received this reel for review from David Watts of Sharnbrook Tackle a couple of months ago and I’ve now stripped and tested it and I’m pleased with what I found. The reel appears to be made from an aluminium alloy and is from China. I’m sure there are very similar reels around under different
Read More 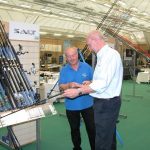 Norman Berry, editor of Sea Angling News, recently visited the Shakespeare & Penn Trade show. Below are his thoughts on some of the fishing tackle about to hit the UK market - Ed I was invited to the first combined Shakespeare/Penn trade show at the Hampshire Rose Bowl and it was impressive to say the
Read More
This is a 3 piece, 12 ft (3.6 metre) boat match rod which comes with 4 inter-changeable tips. The rod can be used with either a multiplier or F/S reel. With a tip in place the rod is of 2 equal 6ft lengths, the other tips are carried in a tube which fits into the
Read More