I will be writing about something that a lot of anglers absolutely hate, however it is a firm favourite of the home forager and that is… CRAYFISH!! 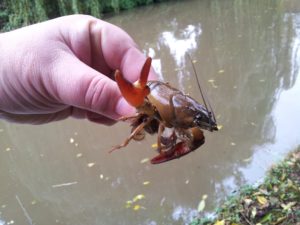 Now from an anglers point of view, yes Crayfish are a problem when it comes to your bait and the way they can strip it down in a matter of minutes, but… Let’s look at it from another angle, have you noticed that the fish we are catching are usually bigger and healthier in areas where there are Crayfish?

There are always ways to get round the Crayfish such as wrapping your baits, using pop ups or even using plastic/artificial baits (although these still aren’t a guaranteed way to prevent catching them).  By finding a way around the crayfish you may find you start catching nice healthy and good-sized fish.

(as a side note it is illegal to return non-native crayfish whether they are alive, dead or even blitzed due to the risk of spreading both crayfish disease and also their eggs, so using them as a bait is definitely a no no although there are some good imitation crayfish such as those from Savage Gear)

So, why am I dedicating an entire blog to a creature that from the Environment Agency and Anglers point of view is an invasive nuisance that should be eradicated as best as possible?

The simple answer is they taste absolutely delicious and if we are completely honest they aren’t going anywhere so why not utilise an abundant food source.

Okay the first thing to cover is that not all crayfish are the same, the one I will be mainly talking about in my article is the Signal Crayfish.  However, there are actually several types of crayfish which are all edible and can be taken for the table.  There is one type of crayfish which is protected, as it is extremely rare due to nearly being wiped out by the crayfish disease and the aggressiveness of the signal crayfish.  The Native White Clawed Crayfish is protected and should be returned to the water as quickly as possible and also notify the Environment Agency on where you caught it.

What I’m going to cover now is the process you need to do in order to start catching your own crayfish.  The first thing you need to do is to get permission (preferably written permission) from the land owner of the water you intend to catch your crayfish from.

At present you cannot get permission from the Canal & River Trust to trap crayfish due to the fact that people abused the privilege and started fishing for them commercially and also in places that were causing problems for boat traffic, etc.  Personally I think that it would be a good idea for the powers that be at CRT to rethink the situation and allow permissions for an angler to use up to a maximum of two traps considering I see many traps hanging from boats and from the banks of houses situated along the banks of the waterways anyway.

There are lots and lots of “crab/crayfish” traps available on the market but for your trap to be legal it needs to be no longer than 60cm, no wider than 35cm at its widest point, the entrance must not be bigger than 9.5cm (this prevents otters getting trapped but you should still check it within 24 hours to make sure no other creature has accidentally been trapped), your mesh holes must be no wider than 3cm and you must attach your Environment Agency Identity Tags to each trap you are using.  A trap that I find perfect for this and is a legal trap is from a company called TackleBits.

Using a crayfish trap couldn’t be easier, simply fill the internal pouch with bait such as fish heads, chicken livers, catfood or good old bacon rind.  Once you have done this attach a rope to one end of the trap (the one from TackleBits comes with a rope) tie the other end to the bank or even a bank stick and throw the trap into the edge of the water.

Wait for no more than 24 hours, then simply pull your trap up by the rope and hopefully you will have some nice delicious signal crayfish inside your trap.

Now as you won’t currently get permission to trap crayfish on your local canal I would like to show you a method that I use to catch crayfish that doesn’t require any special licence other than a standard UK fishing licence (although you are still required to get permission off the landowner, which the CRT will give).  The method is fishing with a rod and line, you don’t need a hook as you simply aren’t going to need one.  You may hook a crayfish by accident but most of the time they hang on by their claws, now you can use an old whip section, an old pole top section, a cheap telescopic rod or even a thick sturdy branch as your rod.

The trick is to get strong braid that is long enough to reach the bottom of the margins in the canal/lake or river that you plan to catch your crayfish from.  Now tie the braid on to your chosen rod (if you want to make it adjustable just put extra braid on and wind it around the rod) and at the other end tie on a small maggot ring.

To bait your “crayfish rod” either hook a piece of bacon rind on to your maggot ring or create a small armamesh bag of bacon rind, catfood or other bait of your choice then simply push the hook of the maggot ring through the armamesh and clip it up. 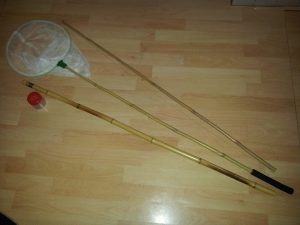 As with most types of fishing using groundbait improves your chances of catching more so, how do you groundbait for crayfish?

I have created a crayfish groundbait rod which gives off lots of attraction but makes it very difficult for the crayfish to actually get any food.  Basically it is a small plastic jar with holes drilled in the sides.  I have then attached line which comes out through the centre of the lid.

The idea is to attach the line via a swivel to another rod, you then fill the jar with the same bait you are using on the crayfish rod, put the lid on and lower it into the edge.

You should be able to tell when you have crayfish in the area as you will start to get little pulls on the line.  Once this happens simply lower your baited crayfish rod into the water next to the groundbait jar and start pulling them out.

It may be worth getting a small children’s fishing net to put under the crayfish as you pull them out of the water as they do sometimes let go.

We now move onto my favourite part of catching Crayfish, cooking and eating them. 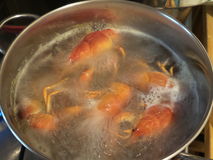 The most basic way to cook crayfish is to tip them into a large pan/saucepan of boiling water (they are killed within a couple of seconds) and cook them on simmer for 4 minutes.  Turn the heat off and leave them in the water for a further 2 minutes then simply drain and eat.

As with their bigger cousins the lobster, cooked crayfish will turn a nice red/pink colour when cooked.  The edible parts of a crayfish are the tail and the claws, to access the tail meat simply pull the tail away from the body and remove the tail meat.  To access the meat from the claws, simply place the claw on a flat surface and crack open the claw with the flat side of a knife or other flat object and pull the meat out of the claw.  You may occassionally find pink/red coloured eggs within the crayfish and these are edible too.

In the centre of the tail meat you will find the vein (intestine tube) and you can simply part the tail meat and discard the vein.  However, if you dispatch the crayfish with a knife through the head before cooking (put in the fridge for a couple of hours to make them lethargic first or you may find yourself on the receiving end of their pincers) there is a neat little trick to remove the vein before you cook them.  To remove the vein before cooking simply twist the central scale on the end of the tail and when it comes loose carefully pull it away and you should find that most of the intestinal tube comes with it.

Although you can eat crayfish straight away, you can make them taste nicer by “purging” them of whatever they have been eating.  There are several ways to purge your crayfish but first lets cover getting them home, DO NOT put them in a bucketful of water and take them home as you may find they have suffocated by the time you get back. Put about 1cm of water in the bottom of a bucket to allow them to stay wet and then simply fill the bucket with however many crayfish you need, make sure that you have a lid as they are brilliant escape artists but don’t forget to put a few small holes in the lid to allow air into the bucket.

Once you have your crayfish home, fill the bucket up with cold water leave for an hour then drain the water and refill, do this five times and you should then find the water stays clear at which point your crayfish are purged clean and ready to cook.

Hope this has been useful.