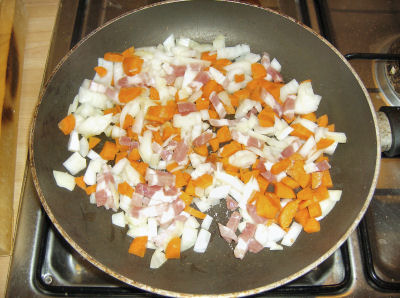 Step-By-Step Guide To Turning Your Catch Into Your Dinner

Very often, I’ve been known to complain about the overuse of convenience foods by today’s Britain. I will admit to using frozen peas and the occasional tub of ice cream but the whole industry is spiralling our of control. There are whole aisles dedicated to ready meals in most supermarkets and I can’t believe that there is a demand for already mashed potato. I don’t mean the dehydrated kind either, to which you add boiling water and get a kind of very thick wallpaper paste. I’m talking ‘real’ potatoes here, boiled in huge vats in a factory, mashed, and then packaged for the can’t be bothered. There’s ‘already grated’ cheese available, too. You can’t tell me that people buy this kind of stuff because it’s time-consuming to prepare. It’s laziness and lack of imagination, that’s what it is!

Having said that, I have the occasional blip of lethargy in the kitchen department and recently bought myself a Fisherman’s Friend/Admiral Nelson’s/Swab the Deck pie, or whatever it was called. It seemed like a good idea at the time, until I served it up. It didn’t taste of anything and was covered in the wallpaper paste potato. Even with a sprinkling of pre-grated cheese, it would have been pretty dire.  I gave myself a stiff talking too. Fish pie is so easy to make and the preparation/cooking time is about as long as it takes to shop for, remove the packaging and cook a frozen ready meal.

When my boys were young, the eldest was into sea fishing in a big way. He used to present me with gifts of love; a flounder, a small whiting, occasionally a codling and sometimes, if I was really lucky, all three. I was expected to knock these creatures into some kind of culinary delight and learned how to disguise things, early on, so that even his little brother would eat it. This was no mean feat, let me tell you. The youngest was ever a fussy eater, and still is to a degree. This fish pie is tasty, easy and you should try it before you decide on the ready meal variety. You might be pleasantly surprised!

You will need:
White fish; a couple of fillets of haddock, pollack, coley, cod…whatever you can get hold of, really.

Pollack, which was traditionally served to pampered cats, is now being promoted as a delicacy. They’re calling it ‘colin’ apparently, the French word for pollack (pronounced ‘colan’). Goodness knows why. We don’t ask for aiglefin (haddock) or morue (cod). It doesn’t make any sense to me, but then, I’m not a marketing expert. Where was I? Oh, yes, white fish. You can supplement it with a fillet of smoked haddock for flavour, and I have been known to add a small tin of salmon when smoked fish has been unavailable, especially when using colin which has very little taste of its own.

You will need:
An onion, leek and carrot, thinly sliced
A couple of rashers of streaky bacon cut into small lardons
Diced chorizo sausage
A fish, or chicken, stock cube
Crème fraiche, ground black pepper
Mashed potato that you’ve made from real potatoes while waiting for the vegetables to soften
Sliced tomatoes for garnish
Salt and pepper.

Method:
Place your fish on a microwaveable plate, sprinkle with a tablespoon of milk and cover with Clingfilm, or another plate. Cook for about five minutes, until you can flake the fish. Microwaving fish, by the way, keeps in all the moisture. My much preferred method.
Stir-fry onion, leek, carrots and bacon gently in a little oil for about ten minutes, until the vegetables are tender. Don’t let them colour.
Add diced chorizo and fry for a further five minutes. This will release the oil and paprika from the sausage into the vegetables.
Add the flaked fish and stock cube and swish around a bit until mixed.
Add the crème fraiche and black pepper – no salt, there’s already enough in the bacon and chorizo.
Stir it about a bit and then bung it all into an ovenproof dish, cover with mashed potato and arrange the sliced tomatoes on top.
Bake in a hot oven – about 200º Celsius – for about 20 minutes or until it’s crunchy on the top.

It should have taken you half an hour to make this dish, start to finish. Even a microwaved ready meal could take 20 minutes to cook, if you include defrosting and standing times. An extra 10 minutes and you’ve got a tasty sustaining dinner without any chemicals, emulsifiers, preservatives… Go on, have a go! Bet you a pint you’ll love it!

Add diced chorizo and fry for a few minutes

Swish around a bit until mixed together

Place in an ovenproof dish

Bake until golden brown, about 20 minutes