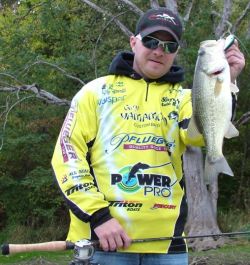 There have, literally, been thousands of times out on the water where I have seen anglers severely limit their success with their own poor habits. They will come across a spectacular piece of fish holding cover and only fish the very outer edges. No matter how many times I have seen it, this still drives me nuts and makes me want to fish the cover as soon as they leave it.

I look at the outer edge of cover sort of like that front porch on a house. You can roll through your neighborhood and there might be a few people on their porches, but the majority of the people are inside their homes. The same holds true with Bass, relating to trees and other fish holding cover. There might be a couple of fish hanging out beyond the outer edges of the trees, but you really need to put your bait up in the nasty stuff to get the most out of it.

When I approach a good looking tree in the water, I like get a good visual of what I am about to attack. My Wiley X polarized glasses get rid of the glare and allow me to see what is under the water. After I see what I am working with, I begin my assault.

I like to hit the outer edges with a Gary Yamamoto Senko first. The reason I don’t go straight for the main trunk of the tree is because I don’t want to scare off everything that is positioned around the tree by pulling a fish out from the deepest part first. There is also a high likelihood that I might get hung up and, if that happens, I will probably have to pull my boat up in there to get it. In the process, I am going to scare the fish away or at the very least make them really gun shy. My goal is to disrupt the cover as little as possible as I fish it.

After I beat up the outer edges, I switch my weapon to a square billed Lucky Craft crankbait, like the LC 1.5 DRS. Making the most out of every cast, I run the bait parallel to some portions while crashing into other sections of the cover trying to trigger a strike. Once my crankbait assault is done, I will begin to cast into the cover with a jig. The deeper the cast, the better, until my Siebert Outdoors jig is crawling through the nastiest stuff in front of me. With this process I am simply trying to maximize my fish catching potential and get as many fish as I can from each piece of cover.

Let me reiterate this point so I am perfectly clear; If you are only fishing the outer edges of any cover, you are skipping right over dozens of fish every single time you are on the water. If you want to get the most out of your trip you have to cast back in the intimidating mess.

One thing is absolutely certain, you will get snagged, hung up or whatever you like to call it. That is just the nature of the beast and a given when fishing where fish actually live. Don’t let this discourage you from fishing these areas. If you get snagged a few times fishing nasty cover, so what? That little bit of aggravation will all be forgotten when you pull out a giant Bass on another cast.  I think it is all worth it at the end of the day.

Next time you are cruising through your neighborhood, remember to pay attention to how many people are out on the porches. Don’t forget, Bass are a lot like people.  So do not limit yourself to only catching those few fish.