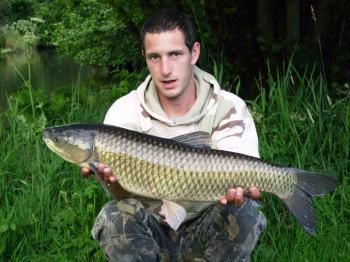 I was recently invited up to Cleveley Bridge fishery by Phill Broderick of ‘Screamer baits’ for a day fishing for carp. Checking the map, I found it was in the far reaches of the frozen North up near Preston; for a Staffordshire boy, that’s a long way! Setting off bright and early, I soon realised that getting there wasn’t going to be that much of a problem as Cleveley Bridge is easily accessible from the M6 motorway so I soon made good time. Turning off the motorway, I passed the easily recognisable Wyreside Fishery before heading off down a single track road towards my venue.

Arriving early, I parked up and, as always, had a wander around the site to investigate. I was soon talking to an angler who was fishing the specimen lake; he had been on the water for a couple of days as part of a family holiday with his wife and children. By cornering the swim known as the ‘point’, they had access to a large amount of water around them without having to put a huge amount of effort into casting. Baiting up quite heavily with pellets and fishing boilies over the top had accounted for several fine carp to 27lbs and some stunning grass carp to almost 20lbs. The youngsters were happily float fishing for smaller quarry, but catching steadily all morning, they seemed more than content.

Continuing to walk through the woodland at the rear of the fishery, I came upon a stock pond. Beautifully hidden away with only 2 fishable pegs and islands of thick lilies, I watched ghost carp materialise like shadows from under the shelter of the pads and start to grub about on the bottom for food. Putting on polarising glasses, I was able to pick out some BIG tench shuffling along at the base of some tree roots further out alongside some weighty bream; a promising start….

Heading back towards the main specimen lake, Phill Broderick introduced himself and offered to show me around. We ambled across to the match canal area and Phill described the fishing to me as we explored through the woods. It doesn’t look like a canal at all, more a still river. No blandness of brick built commercial waterways here, plenty of bankside cover, overhanging trees, reedy beds, shallows, deeps and bays turn this into a retreat of quiet stillness. I’m told that match weights on this stretch often get towards 3 figures, but it seemed a travesty to call it a match water! Far too nice for that cut throat game! Stocked with ide, orfe, roach, carp all manner of others, it responds well to all styles of angling.

The Serpentine lake is an odd shaped little pool with a good head of ‘pastie’ carp and other species. Best tackled using a pole, it is possible to get tight to the main island and the many rushes and reed beds that feature in another gorgeous piece of landscaping. Phill and one of his team showed me how to go about catching the fin perfect carp using a pellet approach from a far margin swim. On light elastic, the fish put up a hell of a scrap to give immense fun trying to get them into open water. Again, this is a small compact water where the angler may well be alone to enjoy the natural surroundings. If you keep nice and quiet, rabbits, foxes and all kinds of birds will entertain you if you get chance to observe between furious arguments with hungry carp! Behind this pool are toilet facilities which are exceptionally clean and well maintained, with fresh water supplied to the overnight anglers for cooking and drinking. Not many places where that is available….even had loo roll!!! (Again, a rarity at most places!)

Phill and Matt Griffin on the Serpentine

For carp anglers, the specimen lake is the main attraction. Covering about 5 acres with varying depths, the lake presents many challenges. Underwater features can be identified by using a marker float, but some are made more evident by the branches and roots visible above the water. Great ‘carpy’ bays, huge masses of lily pads, deep margins, open water and islands all make this a fantastic test for even the most experienced carper.

‘Screamer’ baits are offered for sale at Cleveley, and it makes sense to try them. Boilies, pellets, dips, glugs and groundbaits are all extensively used and trialled here, and some amazing multiple catches have been taken. Owner John Wilding purchased and stocked over 14000 fish when he bought the place a couple of years ago, including grass carp which now hit the bank at over 30lbs! There are some big common and mirror carp which also run into the low thirties, but even the average fish are coming in at over 20lbs. John is immensely proud of his grass carp stock which, without doubt, is amongst the finest in the North West.

Boilie tactics seem to be the main form of attack here, but don’t neglect the opportunity to stalk individual monsters through the shallows or hiding under the pads. There are plenty of them, and a good pair of polarising glasses are a big advantage. Most pegs offer plenty of room for a two man bivvy to be set up without too much trouble; other areas such as the ‘point’ have room for up to three individual bivvies at the same time so there is always loads of room for anglers to fish comfortably. The venue is well away from any roads, traffic or any other source of noise, so the quiet is complete. It’s attractively landscaped throughout (although there was some work still being completed) and has the potential for further expansion. One of the more interesting points about the place is that although it offers overnight accommodation in purpose built chalets, there are four top quality log cabins just being completed. Each one has underfloor heating, plasma screens in each room and everything else that could possibly need. Designed and built to the highest specifications and nestling snugly on the bankside, these exclusive properties are being offered for sale. Further details are available from John Wilding at Cleveley Bridge, but if you fall in love with the place, then they are definitely worth considering.

I asked John Wilding why he purchased the place. He isn’t an angler so relies on manager Keith Holloway to help with running the fishery. He told me that he had been given ‘the nod’ by a friend that Cleveley was up for sale, so came down for a look; later that same day, the deal was concluded and he became the owner. John was honest enough to tell me that he bought it because he wanted his own bit of ‘…peace and tranquility’. Looking around, I can tell you that he certainly has that, but he has a smashing fishery too; why not give it a try?

If you like great fishing in a superb setting, then Cleveley Bridge is just the place you need to visit. For more information check out the website (www.cleveleybridgefisheries.com) or ring 01524 791637