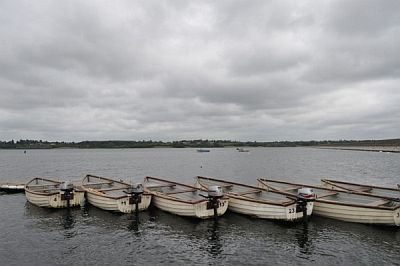 It was nice to visit Draycote again, especially as it was closed to fly anglers last year due to construction work. The rod average on arrival was 5.8 per rod, but last week’s warm weather had long gone and had now been replaced with a cold front pushing a strong NW wind. Undeterred, we set off across to the valve tower and using the drogue fished along the bank into Dunns bay and Biggins bay.

I had a good fish follow, only to refuse at the boat, with conditions worsening fast sinking lines were the order of the day. The fish were down in the water and, having moved over to Farborough bank fishing tube fly’s deep, we started to pick up a few. My boat partner, Graham Howe, taking the best fish of the day; a hard fighting 5lb Rainbow that took a Cat’s sparkler tube fly.

The conditions continued to worsen and the white horses were jumping in the boat, so with six fish between us we decided to call time and head back to the landing stage. All things considered we had done all right on the day.

There is no doubt that this fishery is being well managed by the new lease owner, Ifor Jones, and with Craig Barr as fishery Manager there is plenty of experience on hand for a few pointers on the day.