Solar Tackle’s Martin Locke has returned from a spring trip to Rainbow Lake, where this impressive 64lb common topped a 7-fish tally in some tricky conditions.

Martin explains: “The eagerly awaited spring time trip to Rainbow brought with is less than favourable conditions this time around. My weeklong session was spent on the Island swim on the famous water which, as the name suggests, sees you marooned on a small island for the trip!

“The lake had fished well in the weeks prior to this one, but with the temperatures taking an unexpected plunge and an easterly wind blowing for 6 days and nights, it was pretty obvious that it would be a difficult and very chilly week. The weather was more akin to Siberia than the South of France. 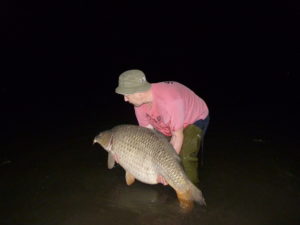 “That said, we wrapped up well and just got on with the job. I ended up with seven carp in total, every one of which was hard earned and memorable. The best of the bunch was this common of 64lb which, unusually, came early in the week on the Monday giving me an alarm call at 3am.

Traditionally a week-long session will build up through the week with the bigger fish coming later on. The big common got snagged on one of the many underwater branches in Rainbow. Using the boat, I got out to it and went to grab the branch that my line was caught on and the common came up right next to it like a scaly submarine, I nearly jumped out of my skin!

“Thinking quickly, as you have to at times like this, I carefully hand lined 64lb of prime Rainbow common into the net before it realised what was going on.

“All fish were taken on Solar Club Mix boilies, on a Kebab Rig at a range of 250m.”