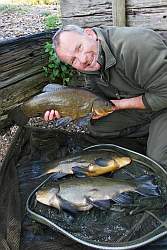 May is usually as good as it gets for fishing, yet come June things begin to deteriorate. However, I still feel we are well behind on our normal summer, at least six weeks with April showers now in full force at the end of May, so June shouldn’t be too bad if things continue. Its been a real contrasting mixture this month, with days of heavy rain and then bright sunshine, yet it’s been the really cold northerly wind that’s been what can only be described as a ‘pain in the backside’ and, come the end of the month, I cant believe that I’m still wearing thermals as well as having a thermal cover over the sleeping bag. Truly unbelievable.

Luckily, the fish have responded to the longer days, shrugged of their winter slumber and responded well to my efforts. I have found myself on the bank on at least seventeen occasions, split between five guiding days, two features, as well as ten sessions for myself, which seems a balanced month, yet five of these days were spent on holiday at Anglers Paradise in which only thirty hours were spent angling!

Working out the hours per session, I’m well above the eight hour target I was trying to achieve at the start of the year, mainly due to the overnighters spent targeting a big tench. However, after the last session in which I received no sleep due to the constant battering of small fish, I have to knock these sessions on the head. It was something I wanted to do anyway once the tench started to show, so from now on its long daytime sessions.

As readers will know, the lake I’m fishing for tench was hard going last month. Well, things have finally started to happen. Chris, who has been joining me, has struggled, at least seven nights without a run fishing spodded particles and boilies, similar to myself. However, the difference is that I have been catching the odd fish, albeit the wrong species. It was whilst fishing an overnighter together that I decided to pile in the groundbait and, since doing so, we haven’t looked back. In two nights, nine tench have graced my net plus a couple of bream. The monster we were looking for hasn’t showed, in fact all we are catching are male tench up to 6lb 2oz, which is a good indication that the females will be big, but where are they?

It’s not just the tench that have woken up, crucians have as well. Godalmings Johnson’s Lake is the place to be, yet it’s absolutely rammed with other specialist anglers. I fished it twice this month, taking an incredible ten crucians over three-pounds, the best 3lb 13oz, in one short three hour session in conditions far from ideal, yet at least it wasn’t that busy. The second short session also produced crucians to 3lb 9oz, so it goes to show that you don’t have to fish days on end to get a result. Just fish the right method at the right time of day.

Breaking personal bests is something I now find difficult to do, so to break two this month was pleasing, albeit from species that have been alien to me during my angling career. Visiting Anglers Paradise in Devon, my aim was to try to catch a five-pound plus golden orfe, yet after a week of fish spotting within the orfe specimen lake, I realised that I was probably chasing ghosts as all I could spot was around twenty orfe at best and estimated the biggest to be around 4lb. I also spotted a red and black koi and a grass carp that I caught later that week. Three sessions on the lake resulted in thirteen orfe. The best golden was 2lb 12oz and the best blue 4lb 4oz, so not a bad result for what I predicted to be in the lake.

The accommodation at the venue is fantastic; spotless, with everything needed to create a comfortable stay, yet as I mentioned earlier, it was the chilly north east wind that made fishing frustrating and difficult.

My guided sessions have seen silver bream, crucians and catfish targeted, yet although the silvers and crucians have been obliging, it seems to have been a very difficult start to the year for cats. I will be having another try soon so hopefully this will change.

Feature wise, I have created Part two and three on ‘targeting tench on a new venue’ for Coarse Angling Today with one titled ‘The final conclusion’ planned for later in the year, spent time with a couple of Nash consultants compiling an image library for them, along with creating an ‘Action Replay’ for Angler’s Mail where an angler shows how effective fishing prawns in the margins is for big carp. The continuous testing of tackle and answering questions continues, so as you can see it’s pretty much 24/5 fishing in my life, as weekends are usually kept free.

Here’s hoping June is as good as May and if a couple of personal bests fall I will be a happy man.