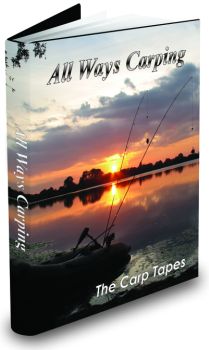 {This isn’t a review, as such, but more of an introduction to a new book by one of the contributors, Gary Bayes. Gary sent me his words below to use on his own Bayeswater Fishing website, but the book looked so interesting that we decided to include it on Anglers’ Net! – Ed}

I was asked to partake in a new carp fishing book concept last year, where 4 well known carp anglers were to be interviewed, answering questions about all things carpy.  Sounds easy enough, doesn’t it, and to be honest it was.  The other three anglers were Jim Shelley, Chris Ball and Nick Helleur.

The originator of this new carp book concept is a chap called Graham Kent, a very successful angler himself who has been around years.  I first heard of Graham through work when he owned a shop in Hastings, but have since learnt that Graham is in fact a very good but very laid back type of angler.

During our day long interview, I realised I was talking to a proper old school angler who just goes out and catches whatever he sets out to catch.  Graham doesn’t like the lime light, can’t handle loads of people and just wants to enjoy what he does, simply fishing.  He couldn’t even bring himself out to the first book launch at the Carp Society meeting; too many people, not his kind of atmosphere, so he sent his boy Jed who is also a keen and successful carp angler and helped his dad turn the tapes into a book.  Jed is a bit more modern than his dad and likes the shows.  Between them I think they have produced a very interesting book, which allowed four anglers to say it as we see it and not have to impress, just carping on about our fishing.

It’s an easy to read book with a lot of informative and of interesting material mentioned. It isn’t a “rig” step by step type book it’s just about the fishing.  If you do buy a copy I hope you’ll enjoy it as much as I did participating in its making.

All Ways Carping is a new book based around a series of in-depth interviews with four of England’s best known carp anglers.  It not only gives the reader an insight to the angler’s mindset but also to their angling roots.  The result is a very honest and candid dialogue with a splash of humour.

The book contains over 100,000 words laced with 225 photographs there is a foreword by Kevin Woodrow of Yateley fame and the book is introduced by long time carp angler and interviewee Graham Kent.

A donation from every book purchased will be made to Cancer Research.

A few quotes from All Ways Carping:

A lot of people always blame their tools and never blame themselves, what I mean is i.e. Their baits are crap, their rigs are crap but they never say they’re crap.
Jim Shelley

I was keen and looked dangerous – in John’s eyes it was too much and I was hauled up in front of the committee on a trumped up charge and unceremoniously thrown out of the club.
Chris Ball

Our parents never really had to worry and we had an incredibly free upbringing with freedom to do what we want and I guess as I’ve got older I’ve subconsciously searched for that freedom in the sort of angling I choose to pursue.
Nick Helleur

I’m lucky to have pictures going back to 1976 when I had a big mop of hair.
Graham Kent