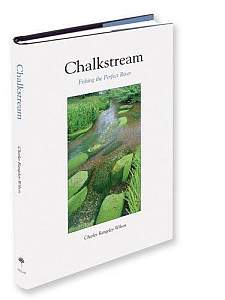 What a great idea – an angling anthology celebrating my favourite rivers. The only puzzle is why did it take me nearly eight years to discover it? I love a good fishing anthology and I’m struggling to fathom how this book hasn’t been on my radar until now – after all I’ve already read everything else Charles Rangeley-Wilson has ever published in book form. (I even reviewed ‘Somewhere Else’ and ‘The Accidental Angler’ 6 years ago for Anglers’ Net – see HERE.

In truth though, there’s not much of Charles’ actual writing in this. He and his editor, Tony Hayter, have assembled a large selection of articles and arranged them by catchment and river. Thus, we have chapters entitled Wessex, Thames, East Anglia, Eastern Wolds & France (Normandy).  Each major river and many, many minor ones are then acclaimed through the writing of others. All the classic angling writers of the 2Oth century are featured:- Sheringham (repeatedly!), Skues, Hills, Plunkett Greene, Venables and Walker to name half a dozen. Well, nearly all. There is a bias in the writing towards trout, which probably explains why there’s no articles form Chris Yates – which is a shame, as he has written eloquently of the Hampshire Avon and Kennet – though usually of barbel. Still, it is a somewhat puzzling oversight given that one of the Dick Walker articles is the Dace chapter form No Need to Lie.

The book is sumptuously illustrated with colour plates, most taken by the compiler and often at the very spot where an accompanying story unfolded (often decades previously!). There are maps of every chalk stream in England, some of which took some hunting down and many of which I’ve never heard of. Frustratingly though, there is no mapping of the French rivers – which gives that chapter a sense it was a bit of an afterthought.

Naturally, when I first opened the book I turned to the articles on my beloved River Kennet and it was with a certain piquancy that I found myself reading of venues and even swims that I have fished and knew intimately. There’s even a colour photo of a swim I know well! However, the pleasant surprise come in the writings of some ‘lesser’ rivers – streams I’ve never heard of like the River Hiz & River Tas, to name a couple. The Field and now long defunct Fishing Gazette are plundered in earnest for many of these articles. Back issues of both publications are often ‘staples’ for anthologies like this one!

In all, there are around 90 articles, poems, diaries and ‘Letters to the Editor’.  One of the pleasures (in fact reasons) of reading a well researched anthology such as this is being introduced to new authors and their works. There are a few books that I now want to get better acquainted with as a result of extracts appearing in Chalkstream. Top of my list is likely to be A Chalkstream Chronicle by Neil Patterson. I’ve bumped into Neil a couple of times on The Wilderness, where his book is set.

The book itself is produced to Medlar’s usual high production values, glossy paper and colour photos throughout – it makes a great present for any chalk stream angler (which is how I acquired my copy!)

CLICK HERE to view this book on Amazon UK.