The Glorious Uncertainty by John Aston 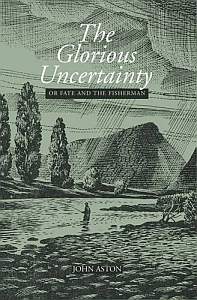 or Fate And The Fisherman

“Message for Chris Plumb …
A Dream of Jewelled Fishes (recommended to me by C Yates) is not a little gem, but one of the finest angling books to have been written in modern times. A very BIG gem … Christ, wish I was on commission – have sold at least 30 of these in the past month. A wonderful book. Love his politics AND his views on ‘modern carp fishing/carp anglers’ ….
James”

It is fair to say that John’s first book – A Dream of Jewelled Fishes – received wide critical acclaim. I was given a pre-publication copy (John is a friend of a friend, though we have never met) to review for Anglers’ Net (CLICK HERE to read the review). I loved it, and said so – yet still received the above email gently chiding me for not going totally overboard about it. Maybe it was my feeble attempt at a pun that wasn’t appreciated!

So, when the publication of John’s second volume was announced last year (2012), it went straight to the top of my Christmas wish list. However, I didn’t make this totally clear to Jaq, my wife, and she ‘held it back’ for my birthday 3-weeks or so later, in January! Hence, I’ve not long finished it.

For starters, I defy any angler to pick up The Glorious Uncertainty, read the foreword and then put the book down! Just read the first 5-and-a-bit pages and you know you are going to be in for a treat – as, indeed, you are.

I said in my review of A Dream that I felt I shared John’s philosophy and views on angling. It seems we even share the same tastes in music. Any author that prefaces a chapter with Neil Young lyrics is OK in my book! There’s more than a liberal sprinkling of John’s views in this work, too, and he’s not afraid to shoot from the hip, particularly if it’s to prick snobbishness, pomposity and elitism.
Because of this observation, I suppose I could be accused of conferring  on John the stereotype of a straight-talking Yorkshire-man, though, having myself spent three summers in the early 80’s having a working ‘holiday’ on a sheep farm in upper Wharfedale, I can confirm that I have witnessed the trait up close! And whilst he may be forthright in his views, they are usually keenly observed, eloquently made and well written down.

There’s more, too. I’m sure many an angler has tried to explain to a non-angler why they do it, what they get out of it, and found they struggle for the words to adequately convey their passion to said individual. John’s prose does a fine job in doing just that.

As you’d expect, most of the stories are based in the Yorkshire, especially Ryedale, so there’s a fair bit of fly-fishing, but in truth John is an all rounder, equally at home targeting a spate barbel on the Swale or a winter chub as he is casting a size 16 Klinkhamer. And, just as in A Dream, we also get a fair bit of autobiography, though he manages to avoid going over any old ground.

A reader’s review on Amazon calls John the John Gierach of North Yorkshire – it is a fitting analogy and one I originally made myself when his first book came out!  And,  when Andrew Herd reviewed The Glorious Uncertainty in Waterlog (#81), he finished off my saying it should be an ‘almost compulsory purchase’. Again, a sentiment with which I heartily concur – though what’s with the ‘almost’?!

As ever, published by those wonderful people at Medlar Press. £18.