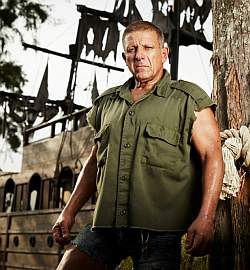 The Legend of Shelby the Swamp Man reviewed by Jeremiah T. Bagwell

{Editor’s note: I have no idea if this is showing on UK television yet, but it’s bound to one day. When it does, you can say you saw it on Anglers’ Net first!}

This week I was contacted by a PR guy that works with the History Channel and asked to watch a television show and tell the world what I thought of the program. It was a new show that the History channel will begin airing on August 6th. I thought to myself, ok no big deal I have written promos for fishing shows before and it is pretty easy. The problem is, while this takes place in and around water, it is definitely not your Sunday morning Bass fishing show.

The show was none other than “The Legend of Shelby the Swamp Man” featuring Shelby Stanga from the History Channel’s “Ax Men.” What the heck? Why on earth would I be contacted to check out this crazy show? It was simple, I am a Bass angler and write about Bass fishing and Shelby absolutely loves to fish. Ok good enough for me. Besides, he can’t be too bad if he likes to fish right?

While I have seen Ax Men a few times and knew who Shelby was (mainly because he was so crazy), I would not call myself a “fan” of the show. I don’t dislike it; I just never get around to watching it. With that being said, I was anxious to see what this show was all about.

The episode begins with Shelby and his poor dog Willie at their houseboat in the Atchafalaya Swamp which has been severely damaged by Hurricane Isaac. For a couple of minutes I started to feel bad for Shelby and Willie because of the loss that they have incurred. But, about 30 seconds into Shelby’s quest to find a new houseboat I was already laughing. He goes and looks at several new houseboats and does plenty of crazy stuff along the way. The houseboat that he purchases is absolutely ridiculous but it will definitely make you think “man that would be cool to live on.”

Shelby is such a uniquely entertaining person that almost everything he does will make you laugh, even if it wasn’t meant to be funny. There was a segment where Shelby was getting out of a car and something happened that made me laugh hysterically. This was not the only funny part of the episode either. This thing was loaded with one liners, swamp slang, crazy antics and Shelby’s funny laugh. From what I am hearing, the show gets funnier as the season progresses. I might want to invest in some adult diapers now.

The one warning that I would like to give about this show is there is a lot of borderline offensive language so I won’t be letting my little boys watch it. I would say it is more of a PG-13 type show. Regardless, I will be setting my DVR to record every episode this season because I am always in need of more laughter in my life and “The Legend of Shelby the Swamp Man” will sure have plenty of that.

Don’t expect to learn the latest fishing techniques or anything like that but be prepared for some silly humor and the occasional belly laugh.