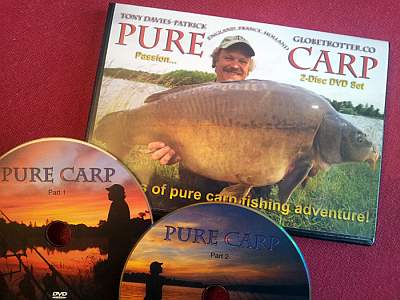 Adventure by the bucket load!

As many site regulars will know, I’ve been an avid fan of Tony’s work for many, many years. During that time there have been various books and DVDs which, to me, have all encapsulated the true essence of what fishing should be about; enjoyment and adventure… and lots of it!

In the ‘media rich’ environment carp fishing has become, there are new DVDs hitting the shelves on a weekly basis, but to be honest, I rarely watch any of them. It’s not that I don’t like the production, the anglers or the fish featured, it’s more to do with the staging which many contain. I fully appreciate big brands need to get their messages across, but for me this often comes at the expense of the enjoyment the viewer should experience when watching a DVD about carp fishing. Don’t get me wrong, there are those who love all the technical stuff and get off on a big list of branded rig bits reeled off by a sponsored angler, but if I want infommercials or technical pieces, I can just go to YouTube or watch it on the telly…

Where’s the adventure, where’s the mystery? If we know exactly how said angler is going to approach the water, every bit of kit he’s going to use, the name, weight, address and voting habits of every carp he’s going to bank, then I’m afraid there is very little to inspire me.

I suppose that being in the trade has tainted me somewhat, as I deal with carp related adverts, features and video footage on a daily basis, and I guess that’s the whole point – if I’m going to make time to sit down and watch a video, then it’s got to be one that offers the ultimate in excitement and adventure… and that’s where Tony comes in!

He’s spent most of his career fishing waters the rest of us could only dream of. There’s no elitism here though, in most cases you or I could just as easily set up in the same peg, just that we’d have to fly half way round the world to do it!

In this the 7th title in Tony’s Globetrotter World Series, Tony concentrates his efforts on waters a little closer to home and spends time on waters in England, France and Holland, ranging in size from twenty acres to over three thousand!

The production is honest and upfront and the spectacular footage shows exactly what happens in the day to day exploits of Tony’s work and the results – of which there are many – speak for themselves. There’s over two hours of quality footage captured on this two-disc set, and if, like me, you are a fan of Tony’s past works, all I can say without spoiling the fun is that you won’t be disappointed!

What I love about Tony’s films is the way the viewer is offered a place right up front beside him, as they capture not just what’s going on within the lakes, but of equal importance, what’s going on around them too, giving you a really good feel for venues you may then want to go and fish yourself someday.

All in all, another thoroughly enjoyable instalment, and as always I look forward to the next! Priced at £16.99 + £1.50 Postage & Packing, available from: http://www.carpfilms.com/. Don’t forget to check out the back catalogue, too!